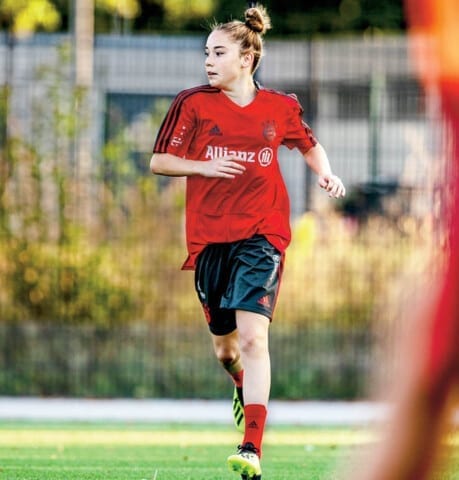 Olivia Moultrie is only 13, but she’s already changing the rules of women’s soccer.

In February, she formally turned pro, signing a contract with a sports agency and endorsement with Nike.

Have you heard of her?
0
Please leave a feedback on thisx

Though it has long been common for boys in the U.S. to skip college to pursue soccer careers, only a few girls have tried it so far. But Olivia has been on an unconventional path for years. She began training at 7, started homeschooling in fifth grade to free her schedule for soccer, and became the first girl to play for a boys’ club team in the U.S. Soccer Development Academy system.

Now she might join the National Women’s Soccer League as a developmental player if the league lowers the minimum age from 18.

While some question Olivia’s decision to forgo college, many expect other young girls to follow her path. “It’s just a shift in women’s sports,” says Olivia’s agent, Spencer Wadsworth.

“Women’s soccer is catching up to the men’s side, and there’s more opportunities for them.”

Do you agree?
0
Please leave a feedback on thisx

Why does this upset me?

I had a son who I schlepped around the country because he was a nationally ranked tennis player. I saw lots of kids who made the decision (or whose parents made the decision) to leverage athletic ability and forego regular childhood activities (like school, friends, etc.). I found myself having a visceral reaction to this choice. Yet, if I had a child who had the potential to be a concert violinist, would I also want the child to “grow up normal”? Is it sports for me or is it premature decisions that deny children a childhood?