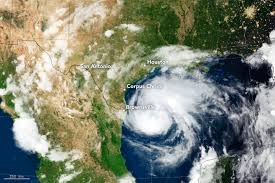 Hurricanes have been ravaging parts of the Atlantic and taking the homes and even lives of people living on the coasts. In the last year, three category 4 hurricanes made landfall in the US alone. Obviously natural disasters have always been natural and most still are, but this sudden change in hurricane intensity has scientists wondering what we can attribute this strange pattern of hurricanes to. The Union of Concerned Scientists says that the number of category 4 and 5 hurricanes has nearly doubled since the mid 1970’s. Global warming is the direct cause of this intensifying pattern of hurricanes. We must take major precautions to protect our coasts and the people that live near oceans.

In an article published by Time, Jeffrey Kluger discusses how global warming has provided the perfect conditions for hurricanes to gain power and the ability to ravage coastlines. Hurricanes are fueled by warm water and global warming has provided plenty of that. According to UCAR, the average ocean temperature of our planet has risen 1.53 degrees fahrenheit from 1880 to 2012. This warming of the oceans provides for fuel for hurricanes to intensify and gain power. Hot air also plays a major role. It causes the air to carry more water with it, thus, causing more damage as the torrential rains fall over land.

Many cities are taking major precautions to protect their coastlines from these powerful storms.There is talk of creating sea walls to protect New York from hurricanes. In another article published by Virginia Gewin, “Natural defences can sharply limit coastal damage,” she discusses how natural habitats like coral reefs, dunes, and marshes are key to protecting our coastal communities from hurricanes. Many of these natural habitats have disappeared also due to climate change and human activity.

Hurricanes are in the top ten most common natural disasters in the US. It is vital that we take this evidence that climate change is worsening storms seriously and begin to take precautions in protecting our coastlines from hurricanes. Obviously, we have a long battle ahead of us with slowing down climate change, which is the root of the problem but in the meantime, we must begin to take precautions. The government needs to prioritizes the protection of the natural habitats that surround our coasts because they will, in turn, protect us from ravaging hurricanes. If we don’t take precautions or begin to change our lifestyles, our coasts may be completely destroyed in the near future.