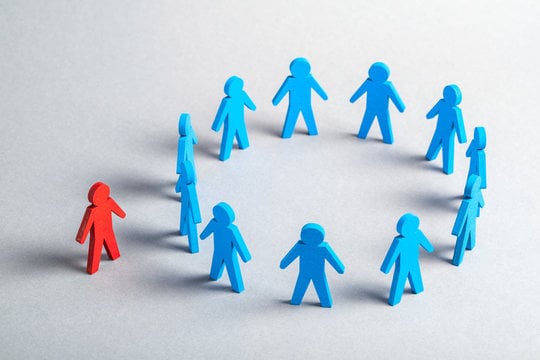 America is a melting pot of different cultures and backgrounds. It was built on the foundation of equal rights and opportunities for everyone. These equal rights were the central concepts that helped build America’s values and helped draw people from all over the world. But is America always equal? For the most part, America has tried to end discrimination and present people with equal opportunities. However, there is something America can never abolish: prejudice. America can eliminate discrimination in the workforce and increase opportunities for minorities, but it doesn’t have the power to change what’s inside a person. Stereotypes and biases will never fade away. People intentionally or unintentionally treat others based on nationality, race, or sex. When prejudice becomes the basis of how people interact with minorities, the basic rights of these people are often challenged.

Stereotypes often make people assume someone is a threat because of their race or nationality and thus might try to defend themselves against that innocent person. For instance, the book, The Hate U Give by Angie Thomas, was based on the true story of how an unarmed African American man in California was killed. Thomas wrote the book to represent the prejudice African Americans face. In the book, Angie Thomas tells a fictional story of how a white officer killed an African American named Khalil. The officer stops him for failing to signal lanes but then shoots him, assuming Khalil is carrying a gun. Due to the false assumption of that officer, which he based on the stereotypes he had about Khalil’s race, Khalil lost a fundamental right of which America stands for, the right to live.

Minorities frequently lose access to services because of racism and the biases of businesses. An example is Amy Tan’s essay, “Mother Tongue.” In this short essay, Tan explains how she grew up with a Chinese mother who didn’t speak fluent English. She describes how this affected how others treated her mother. People wouldn’t offer her a service or take her seriously when they heard her speak in her “broken” English. Tan offered an example of this. Her mother went to the hospital to check on the results of a CAT scan, searching for a brain tumor. When she tried explaining her concern to them and asked to see the results, they tersely said they had lost the scan and unapologetically told her to wait. This story conveys the idea of how people who come to the alleged “land of opportunity and equality” don’t always receive equal services or access because of the discrimination and racism against them. Due to the apparent bias of that hospital, Tan’s mother wasn’t given the essential information she needed to become familiar with her health which is a basic right she has and should’ve been given.

Prejudice comes in many different forms and against many groups of people. Once a person is associated with one of these groups, the treatment they receive differs significantly. Of Mice and Men by John Steinbeck demonstrates this through numerous examples of this concept. Multiple different minority groups were represented in his book, including an aging man with a disability, a man with a mental illness, a woman, and an African American. These characters lost their equal rights to how they were treated in the book. They weren’t considered equivalent to the others. They were treated predominantly due to the group they belonged to. The woman was rejected whenever she tried to converse with anyone because everyone presumed she was there to cause trouble. She wasn’t even given a name in the book. She was always referred to as her husband’s wife as if she was his property, not an equal human. The African American was dehumanized because of his race. At the ranch where everyone worked, he was isolated in a cramped and dilapidated room near the farm animals while others had more comfortable working conditions. The main character, Lennie, didn’t receive the treatment he needed to help cope with his mental illness. People didn’t make him feel welcome, and even his closest friend didn’t trust him and thus never let him voice his thoughts or take his own actions.. The fundamental rights of these minorities were being violated. They weren’t given the right to be treated like everyone else, like a human. The lack of equality defies what America truly stands for and the values that define America.

This racism is what’s left of how people treated these minority groups in the past. Racism is still present today; it only decreased.  Langston Hughes wrote about how America didn’t live up to its standards regarding the treatment of minorities. In his poem “Let America Be America” Again, Hughes states, “I am the Negro bearing slavery scars. / I am the red man driven from the land, / I am the immigrant clutching the hope I seek- / And finding only the same old stupid plan / Of dog eat dog, of mighty crush weak” (Hughes). This quote helps demonstrate how unfair America was in the past. These freedoms were given back to these groups, and discrimination healed over time, but it left a scar. In other words, the impact on them has been alleviated, but what remains of prejudice can still affect the lives of these groups of people.

America has tried to reduce inequity and the apparent gap between different groups over time, but it’s impossible to make it disappear entirely. And what’s left of it is leading to violations of the rights of these people, meaning America still isn’t the perfect “land of opportunity and equality.” And while the effect on minorities today is a drop compared to the ocean of impact it had in the past, it’s still significantly noticeable.