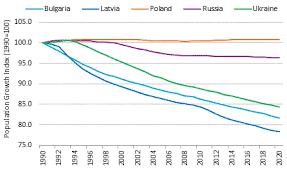 There are several reasons why multiple countries decrease in population every year, even as the world population increases.  Increased education, especially in regards to women, have led to decreased birth rates.  Another reason for population decline can be tied to lack of opportunity in several areas which leads directly to immigration to more profitable or free countries.  Immigration rates also relate to political unrest and war in certain parts of the world.  While this is not the case for every single country with population decline, a large majority experience this. Syria is declining most rapidly in population.  As of 2015, it was posted as having a 9.73 percent decline per year.