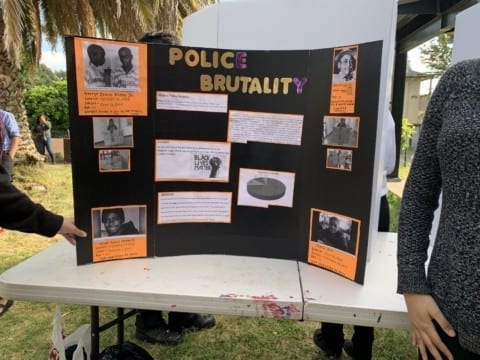 In this project I learned many things. I learned that I have a voice. I learned that I am more than capable of standing up for what I believe in. But most importantly, I learned how to be an upstander and what being an upstander means. The project that was assigned to me was police brutality. Although this topic was assigned to me I don’t consider it as assigned. The reason why is because this is a topic that I am truly passionate about and I believe that it’s a topic that needs to be talked about and taught about. I feel like talking about this topic is more of an opportunity than an assignment. Police brutality is an issue that impacts many people especially people of color. Being an upstander means not consenting to people’s oppressive actions and standing up for what’s right. Police brutality is something that we need to fight against and for that reason I am choosing to fight against police brutality. Police brutality can mean many things most of the time it can mean force and physical violence but, it can also mean verbal abuse and judgement. Me and my group chose to specifically teach youth about this issue because we felt like they have the right to know about what happens in their communities. Me and my group decided that the first step to becoming an upstander is to raise awareness and educate youth on this issue. My advice to you all is to fight for what you believe in and to use the voices that you have because words have power.

I really like your project, but there are a few flaws with it. First, by only having black and white headshots of people, you make them seem very disconnected and you take away a little bit of our relatability to these people. This is a major problem when you are trying to emphasize how these are people and that they are being completely and utterly mistreated. Another thing that you should think about with you project is how people tend to argue against police brutality. A lot of people just say that you should just listen to the police and you will be fine, but I think that it would be important to get cases where people are hurt regardless to how well they listened to the police officers. This could help to outstep people who would just try to take away meaning from your project before they could even try.

This is so informational!