Police Brutality in Our Country

Home Police Brutality in Our Country 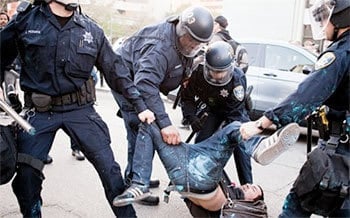 The fictional novel, All American Boys, written by Jason Reynolds and Brendan Kiely, focuses on the topic of police brutality in America. The book progresses from the false accusation of an individual African American child to an organized protest that affects the entire city. All American Boys was inspired by real events and reflects the harsh reality of racial discrimination. Police brutality towards people of color is an increasingly prevalent issue within our society today, and has become embedded in our history and our evolving culture.

Police brutality in America is a serious issue that impacts individuals in our country.  In particular, it impacts colored young people the most. According to Anthony Bui of UCLA, “‘Police violence disproportionately impacts young people, and the young people affected are disproportionately people of color’”(Bui qtd. in Fox). Also, black people are three times as likely to get killed by the police than white people (Mapping Police Brutality). These statistics support the statement that in America, people of color are the main victims impacted by police brutality.

Police violence towards people of color has existed for centuries, and its remnants are evident in more ways than one. According to Abigail Louise Cosgrove of Penn State, Black Panther Leaders were killed by more than 90 shots fired by the police in 1969. Black people are three times more likely to get killed by the police than white people (Mapping Police Violence). This statistic shows how racism is still relevant today. Samuel Egerton, a college professor who donated the poster that read “WE DEMAND AN END TO POLICE BRUTALITY NOW!” from 1963 March on Washington, said that “‘The message after 50 years is still unresolved’”(Egerton qtd. in Nodjimbadem). The specific case, statistics, and Egerton’s statement show how people of our country are still affected by police brutality. Despite the fact that people of color, who make up a large percentage of the American population, have been and still are disproportionately affected by police violence, the issue has yet to be settled. Although America may want to hide its problematic history, it’s undeniable, seeing that racism rears its ugly head even today.

Different movements in different parts of our country are making changes in our country. People create movements and organize protests to make a difference in America.  For example, the Black Lives Matter movement fights for black lives through the use of social media and other programs (Jenkins). The movement raises awareness of racial violence and inequality against African American, including police brutality. The Black Lives Matter movement is causing an increase in attention and political engagement to the ongoing issue. The changes the movement are making are significant in our society.

Despite the tragedies that have been inflicted on people of color, there is still hope in the future for justice. With efforts from different groups, change is happening.

I look forward to the day where there police brutality and racial discrimination becomes an issue of the past that future generations learn from, and prevent history from repeating itself.

Fox, Maggie. “The Lives of People of Color Are More Likely to Be Cut Short by Police.” NBCNews.com, NBCUniversal News Group, 7 May 2018, www.nbcnews.com/health/health-news/police-killings-hit-people-color-hardest-study-finds-n872086. Accessed 26 Oct. 2018