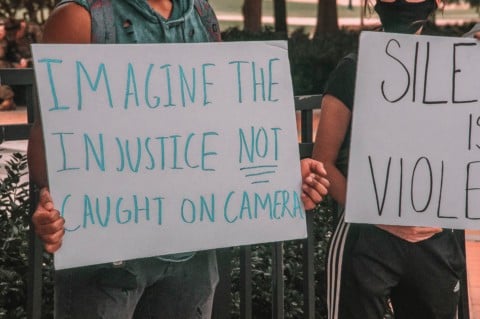 One “solution” for Police Brutality was to have police officers wear body cameras, this was supposed to help us give evidence when brutality occurs, but also decrease brutality as a whole.

These cameras have failed to help end police brutality, not because they aren’t giving enough evidence, but because we have no access to it. Officers and police departments are allowed to withhold the information and footage on a body camera from the public.

While body cameras as a whole have decreased the use of violence during police encounters, there is still a monumental amount of brutality that occurs and the victims are not able to get justice without the evidence on the body cameras.

Increasing the money given to police departments to get body cameras will not end or change the police brutality that occurs. One solution for this problem would be to make body camera footage available to the public. Police departments should not be able to investigate their own officers for brutality, there should be a 3rd party to investigate and release footage to the public.

Black and Latinx people have encountered brutality at higher rates than white people, we have seen innocent men and women killed and harassed by police officers on body cameras many times, and they still have no justice, the third party with no bias could get them the justice they deserve. This solution is reasonable, cost-effective, and better for the community as a whole.

Hello Nyayeek,
I really enjoyed reading your post about police brutality and the “solutions” police departments are providing in hopes to end brutality. Like you said in your post, POC are greatly affected by this issue regardless of the use of body cams. The only solution is the redistribution of money in all police departments. With this, they could properly fund areas such as, training in which they could successfully arrest a person without killing them. But instead, money is being put into useless body cams.