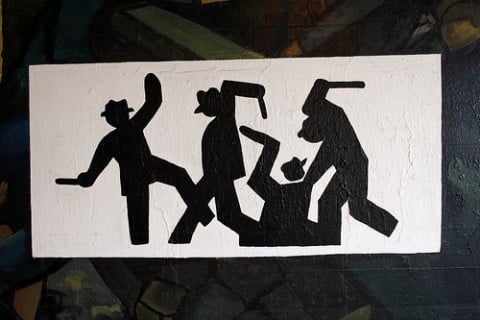 Police relations are very important to focus on because police officers have  killed and harass people of color due to them looking “suspicious”.Instead  asking for an explanation or  handcuffing them, they take many black people’s lives not knowing how much it affects the community and the people around them that will make them seem dangerous and racist. The main reason why we have police brutality is that cops are hired who aren’t from Oakland,with a badge on there chest  cops feel more privileged and believe they have more power and they have trust issues between the community and cops.

To begin, police brutality is the use of excessive or unnecessary force by the police that perform verbal attacks on the citizens of the community which is people of color which is police’s conduct of being racist and a lot of intimidation .  This connects to my interviewer named Roosevelt Johnson who has lived in Oakland for 53 years who knows a lot about police brutality,he looks at the news a lot and does research on the black lives matter movement. ”I despise police brutality; to have the very people sworn to protect you , harass ,brutalize, even rape based on looking suspicious.Some policies go by the laws and others make up their own laws because they feel they can handle the jobs without instructions,”(Johnson). This interviewer saying is important because police take advantage of their jobs, they don’t think about saving the community. They think people of color who looks suspicious , they have did something bad. But you have to think the police intentions are based on the stereotypes of people of color which makes them attack black people. They are damaging Oakland because they are oppressing the community which makes the community get involved.

Additionally, having Oakland become more involved can make a huge impact on the law enforcement because they are setting bad examples for themselves nationally(media, news, websites) where everyone can see the emotional manipulation . My second interviewer named Kathy Johnson she was born and raised in Oakland for 41 years, she has seen a lot of impact on what Oakland has become of being negative and positive. Also she is credible because she is african american and she sees people of her color going through this harassment and killings by policies. This interviewer stated, “ As you see on the media , cops reactions are being aggressive and doing takedowns for example Michael Brown who has been shot and harassed by the police, it has been on the news a lot which it impacts the community emotionally and physically . This interviewer words are credible because cops are making the Oakland community lose trust in them because they see the negative vibes from the polices which makes them keep their guard up and that’s why you see in protests or in general with policies you see them refusing to back down or listen to the law enforcement because look at the impact of black lives matter, people are doing whatever it takes to make their voice heard.

To go on forward with, Oakland is losing trust quick for the law enforcement because so many young people has been killed or harassed, it makes me wonder do the law enforcement check their officers to make sure that they are actually here to make sure the community is safe and not here to harass and kill based off skin color because the officers who don’t live here are getting the wrong idea of trying to serve the community. Mercury news talks about how the  Oakland police brutality protests about the policies and their law enforcement which has something to do with the trust. Mercury news states ,” Keep peace on our streets and protecting the safety of Oakland residents and business in our top priority… although we don’t anticipate problems to occur , in the event that the demonstrations become unlawful , the Oakland police department is prepared to swiftly address any criminal behavior that would damage property or jeopardize the safety of the police or police officers,”(mercurynews) . This is credible because it’s stating that police officers are setting bad examples for themselves because their actions impact a lot and makes the public think otherwise and starting to have doubt in the law enforcement thinking that they are not doing their job , but to think back to again some policies they think that having a badge, they can overrule but do not get consequences for their wrong doings. Protesting can make you see the reality and beliefs that each protester is facing.Lastly my interviewer named Colleen Weyland who is a Teacher and a Journalist  who has saw personal harassment from policies. Also background of journalism about Oakland Bay Area  and work with polices as a journalist. She also believes that police brutality is a big issue and impacts the community a lot. She states ,”Police involved shooting and institutionalized racism. Some take advantage of their job because they feel they have power and use people of color as an excuse and get no consequences.” This is credible because it shows that policies are oppressing the colored community and harass people of color just because without  reasoning. That’s why there is less trust because people have the fear of getting hurt , also because of the history behind the department misconduct.

Dear K’Chelle,
this was a very informative article. Your views of brutality really make me think about what is wrong with our justice system. Police officers are meant to protect and service our communities, not harass the colored citizens. Maybe in the future you can incorporate more views from other writers and people who have experienced brutality.

Firstly, when you say that, ” cops feel more privileged and believe they have more power and they have trust issues between the community and cops,” are you just assuming that all cops outside of Oakland are like this? It seems that this kind of generalization is dangerous, and it’s what your accusing the cops of doing, but don’t you see it as a little hypocritical?

In the second paragraph, you only assume that police brutality only occurs to people of color, and no one else. I too, am a person of color, but that doesn’t mean I’m going to cherry-pick facts to push an agenda. There are white people that experience police brutality. Every race as at some point. When you make it seem like that’s not the case, you are blatantly lying to your readers. If I’m wrong, please correct me.

In the third paragraph, you state that the reporter is credible because ” she is African american and she sees people of her color going through this harassment and killings by policies.” Is that the only reason why? What if she is a blatant lair and because she hasn’t been fact checked, so everyone believes whatever she says, even if she spreads misinformation. Basing her reliability purely on her race seems kind of close minded and racist. Again, If she’s actually super reliable, correct me, please. Also, claiming that “policies” put out “negative vibes” doesn’t mean that it’s protest-worthy, and could you please give some examples of these “policies”? Or is it due to the cops keeping their guard up due to them being in an unfamiliar area (as you mentioned before that Police Brutality in Oakland is due to transferred cops, and not cops who are familiar with the region). Violent crime is very heavy in that area, and you are accusing the cops of being on edge?

In the final paragraph, you claim that cops are just killing people left and right, with completely no justification, and that “because they have a badge, they can kill people with no consequence”. There have been plenty of cops that have received some form of punishment for wrongdoing. You also love talking about a lack of trust between cops and the citizens. I don’t think this is a two way street, however, and I think that we should trust our cops more.

Again, I dunno. Maybe I said something wrong, but please correct me if that’s the case. Please provide some evidence if you are going to make a claim, or a counter to whatever I said. Although, as a “person of color”, I have more faith in my police force.

Dear K’ Chelle
I agree with your views on police brutality and feel deeply within me that this issue is not discussed enough within communities. These police harass the people they have sworn to protect because of flimsy suspicions that are majorly based stereotypes that oppress African Americans. All of your examples of police brutality were spot on. Keep up the great writing and research!

Dear K´Chelle
I agree with your views on police brutality, it is not right for them to beat someone up just because the color of their skin or their ethnicity. They should be protecting all the people from harm but some of them are just spreading it. I know not all cops are bad, but in certain areas there is a lot of crooked or dirty cops around that are just not doing their job. Your example of Oakland was a great one, some of the cops are not doing their duty just killing or beating up innocent people based off their ethnicity not only black people that margin could spread out quite a bit. Anyways your article was awesome keep up the great work.

This is a heavy subject due to the history of racism within the country, and all of the protests and marches as of lately. It is awesome that you are willing to dig deeper into something so difficult. You brought up some interesting points regarding institutionalized racism and verbal and physical assault. It would be really interesting if in the future you could include an interview with someone who has had issues with the police personally, for a firsthand perspective. Also, do you know of any statistics on people who have been victimized by the police in Oakland? Having that as a comparison would be really interesting.

Keep up the good work! I can’t wait to see how your research progresses in the next article!

One sentence you wrote that stands out for me is “The main reason why we have police brutality is that cops are hired who aren’t from Oakland,with a badge on there chest cops feel more privileged and believe they have more power and they have trust issues between the community and cops.” I think this is a good explanation of why cops form other city’s cause police brutality.

I appreciate for your writing.

I appreciate your entry…do you think police brutality only happens to black people? Or do you think it affects other people of color?