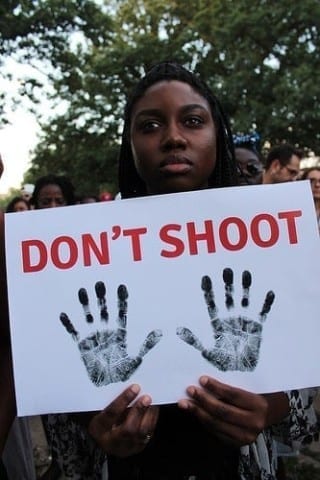 In our country, Police Brutality has been one of our biggest problems that we need to address. New cases of police brutality and civilians being killed pop up on the news every day. Due to the fact that most of the victims were African American or minorities, police brutality has been linked to racism. This has angered many citizens and has resulted in protests that lead to more violence. This caused a national “crisis,” fueled by the Black Lives Matter movement in which their goal is to get justice for those who have been harmed by police brutality.

There have been numerous articles that give detailed reports about police brutality throughout the country, many in which show the need to fix the issues in which terrorize our society.

For example, this article http://www.huffingtonpost.com/entry/lapd-shooting-boy_us_57f6df31e4b068ecb5dd6f9c?utm_hp_ref=police-brutality talks about how a 16-year-old Hispanic boy, Daniel Perez, who was fatally shot in Los Angeles. This and many other cases caused national debate about the use of lethal force from police officers.

The reason why all of these incidents happen is because Police officers are using their firearms against innocent civilians.

Another article http://www.nytimes.com/2016/10/13/us/keith-lamont-scott-was-killed-by-two-gunshot-wounds-family-autopsy-finds.html?rref=collection%2Ftimestopic%2FPolice%20Brutality%20and%20Misconduct&action=click&contentCollection=timestopics&region=stream&module=stream_unit&version=latest&contentPlacement=4&pgtype=collection&_r=0 talks about yet another shooting of an African-American by the police officers of Charlotte N.C. This has led to several days of protests and has even led to the death of one protester.

As you can see Mr./Mrs. President, this is no longer just about getting justice for the victims’ families but it’s about keeping everyone else safe from the riots and protests that can get people hurt or killed.

If you could do something to fix this problem, our nation would become more united and more people could then live life knowing that they won’t be killed for no apparent reason.

This work can be found on Letter 2 Next President. Worked on by Thomas Cho, Tuan Hoang, and Onyu Pak.

Hi,
I’m your secret writing pal. This is a very interesting post and is very well written. I agree with your opinion and think that police brutality is an important topic to talk about.

This issue is not only about the killing of black people and other minorities anymore. I think this issue is now about equal treatment in general and not only in killings by the police. Minorities should not have to worry about being pulled over as often. The only question going through the mind of someone who is pulled over is “what did I do wrong?” instead of “is it because I am black?”

I think police brutality is a serious topic. But people don’t think it is a big topic. I agree with you that it is has lead to more violent and causing more issues. When need someone to stop police brutality and I think that needs to be the next president. I agree with you that most of the victims are african americans and needs to be fixed. I like your information and I like your topic.

Allison- This is a very interesting topic that is very eye opening. I love how u have tons of evidence but you should try weaving this into the texts instead of linking straight into the text. Other than that this is a very good stance and I believe with more evidence and popularity this can be a very successful essay.