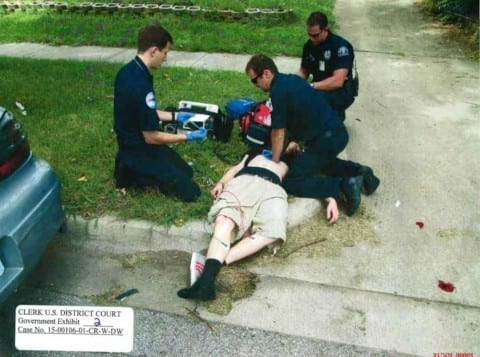 There are many topics I want to speak about and it was hard to chose one, but the topic I chose to address is police brutality. I think that when hiring, they aren’t paying attention to some people’s mental stability, and attitude problems.

Many officers hold grudges against people, are biased towards certain races, and over use their powers just because they can. Almost everyday you see on the news that an unarmed person was shot and killed, and sometimes it’s unjustified. Other times you see police beating people and tasing them longer than they’re supposed to just to make them suffer.

Like the story about a cop named Timothy Runnels who beat and tased teen Bryce Masters into a coma, for resisting his arrest after the officer didn’t tell him why he was being arrested. In the video, Masters was tased in the chest for 20 seconds, which is four times longer than a cop is trained to use a taser, causing him to actually die momentarily until the paramedics could resuscitate him. The teen hadn’t even fought back when told he was getting arrested but the cop still decided to use excessive force, and also slammed the teen down face first onto concrete causing brain damage.

Hearing and seeing things like that upset me very much, but i’m happy that we’re in times where people are starting to take videos that can be evidence of wrongdoing. I feel like having body cameras might not be the problem solver to end these situations but it has helped a lot.

Police are meant to protect us and make sure that people are safe and are following proper rules, and it seems like we need protection from them, and I hope one day that we can fix this.

I think your post is a very important topic to talk about. Police brutality has been something that has been a huge isssue recently and it is extremely disappointing thing. Many people in the world are starting to fear for their life when they need or get stopped by the police. I think this isssue should be resolved because it is hurting our country and making us live life with fear.

I am disappointed after reading your post, “Police Brutality” because police should take action when someone is doing something really messed up and in most cases it does not matter police do whatever they want with people even when they are not doing nothing wrong.

One sentence you wrote that stands out for me is: “ Almost everyday you see on the news that an unarmed person was shot and killed, and sometimes it’s unjustified.” I think this is really messed up because many people is dying and not any people but innocent people. Also I think that if a police sees someone that is unarmed they shouldn’t even bother to shot or mistreat them.

Another sentence that I liked was: “Like the story about a cop named Timothy Runnels who beat and tased teen Bryce Masters into a coma, for resisting his arrest after the officer didn’t tell him why he was being arrested” This stood out for me because there was no need for the police to take actions and just beat him to death. Police has to have reasons to arrest people but not to beat up.

I do agree with you that police was meant to protect us and make sure people are safe and are following proper rules. One reason I say this is because people needs to be safe and we can’t protect yourself all the time we need help from the police. Another reason I agree with you is that police has to make sure we all follow rules and not mess around.

Thanks for your writing. I look forward to seeing what you write next, because this was a really great topic and really good information.