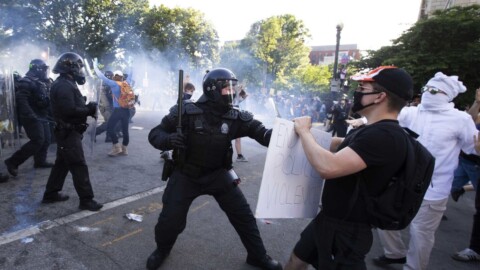 In the article, “BLM vs Trump Supporters” (McGraw Hill) I learned that people with a different type of skin tone are being mistreated.This is a shocking situation that is going around where people with a whiter skin tone can storm in the capitol and not be harm but where people with a darker skin tone that are protesting to get equal rights are being hurt. It also begins with people that white skin tone and are totally different because they can rush and get weapons to use that the police but where the people with the darker skin tone just holding a poster and people just rushing at them and hurting them or even killing them. Some examples say “ I think that the police are the aggressors on the right but the trump supporters are the aggressors on the left. I think that it is unfair that they are treated differently because of their skin color.THe protesters are just standing there and the rioters are rushing the police. The protesters are holding BLM signs and the rioters are holding a baseball bat.”.

I think what’s happening it’s really awful and disgusting. I can’t imagine feeling unsafe in stores or even being outside of their house. I can totally imagine them beginning to be afraid of cops. how unsure if they are safe around police.

What do you think of this type of behavior is acceptable by the police?