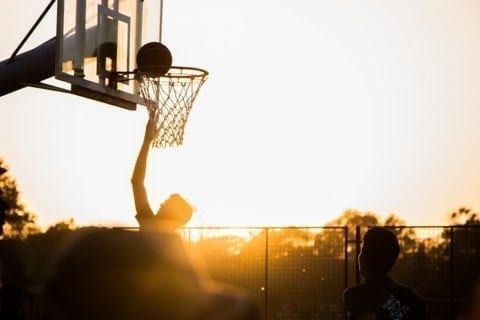 slowed to a stutter. Their gestures, in love

again with the pure geometry of curves,

rise toward the ball, falter, and fall away.

On the boards their hands and fingertips

and balance. Then, the grind of bone

and socket, the caught breath, the sigh,

the grunt of the body laboring to give

birth to itself. In their toiling and grand

sweeps, I wonder, do they still make love

to their wives, kissing the undersides

of their wrists, dancing the old soft-shoe

of desire? And on the long walk home

from the VFW, do they still sing

moving, the one in army fatigues

and houseshoes says to himself, pick and roll,

and the phrase sounds musical as ever,

radio crooning songs of love after the game,

the girl leaning back in the Chevy’s front seat

as her raven hair flames in the shuddering

light of the outdoor movie, and now he drives,

gliding toward the net. A glass wand

of autumn light breaks over the backboard.

Boys rise up in old men, wings begin to sprout

at their backs. The ball turns in the darkening air