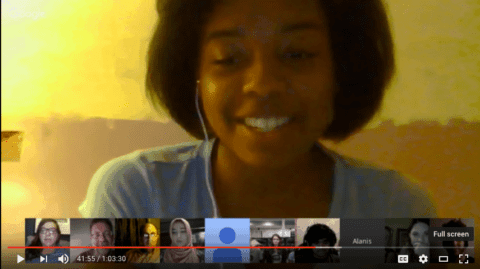 TTT http://edtechtalk.com/ttt turns the hangout over to youth on Wed June 29 at 9pmET/6pm PT Youth Voices LIVE! will welcome:
— youth from http://www.integratenyc4me.com along with Sarah Zapiler and Sarah Camiscoli
— youth from http://www.baltimorealgebraproject.org along with +jay gillen
— students who have been working this summer with +Jose Rodriguez  and others to design “a youth network around global education action.”
Like Facebook page for CU4C https://www.facebook.com/cu4cissn/
Come learn what +Hebh Jamal and +feyisola oduyebo  have been doing to research and fight for integration in NYC schools. And what+Abby Henry, +Andrei Mejia and the CU 4C team have in mind.
Join +Karen Fasimpaur and +Paul Allison  as we help youth organize around #stuvoice this summer! We’ll put a link for you to follow to join the Hangout On Air on a TitanPad that you can find just before the conversation begins at http://edtechtalk.com/ttt Join us on Wednesday, June 29 at 9pm Eastern/6pm Pacific.