Plot Analysis Of Death Of A Salesmen.

Home Plot Analysis Of Death Of A Salesmen. 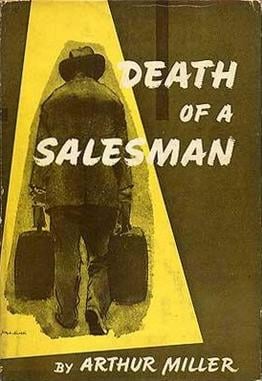 Recently, I read Death Of A Salesman , by Arthur Miller .  I was distraught in a sad way about  this book. I say this because throughout the book willy loman has been suffering from depression in my opinion and he is hallucinating about his late brother still begging alive and is secretly trying to kill himself behind his family back.

The protagonist is Willy lowmen . This  story is set in the 1940s , specifically in Brooklyn . The significance of the story taking place in Brooklyn is that the house the lowmen live in is kinda a worn out broken place and Willy and his wife have been trying to pay it off for years and that’s what makes willy go to work every day, but the problem is that the company doesn’t need him anymore after all of these years and he is basically working for free

Willy Lowmen faces certain forces and pressures. He is up against his son biff loman, and when i say up against him it’s like he is disappointed in  forBiff  for  not being successful, but Biff is still trying to find himself.  Willy meets these forces and pressures by deciding to instead of helping his son he just yells at him and calls him names. You can see this early in the book.

The tension rises when Biff figures out his father is trying to kill himself and his  mom Linda has not told him and his brother happy Lowmen. So he starts an argument with his father and it starts to get crazy and Willy keeps calling him a low life and Biff for some reason is agreeing with him and saying he is not made to be a salesman or a businessman . This might leave a reader feeling disbelief because Willy starts to understand and he begins to calm and he tells everyone head to bed while he goes for a walk but really he goes in his car and crashes into something  so he can die.