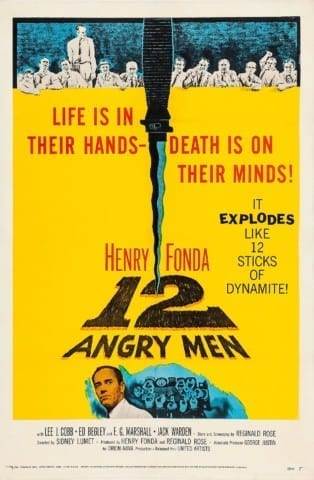 Recently, I read  12 Angry Men , by Reginald Rose.  I was amazed by this plan, due to the fact that one man pleaded not guilty and convinced 11 other men to do so as well to save a 18 year old boy’s life changed The protagonists in the book are called junior 1-12 their story is set in 1950s and i think in new york , specifically the courthouse . The significance of the courthouse  setting is that this is where all the arguments happened there.

The tension rises when junior 8 starts convincing people that the boy is not guilty and junior 3 and 10 start to get mad at the other juniors for changing their minds because in their mind they are certain that the boy is guilty. This might leave a reader feeling confused . i say this because you dont know if junior 8 is just twisting the facts up and letting a murder go, but he also has good fax that he is innocent The play  climaxes when  when at some point junior 8 is describing one of the senses of murder and jurior 3 gets fed up with this and starts arguing with him, and junior 8 cames back with calling him names and junior 3 get really angry and tries to punch him but the other jurors hold him back and he kept saying “i’ll kill em, i’ll kill em, but then he stops because it makes another good reasonwhy the boy is not guilty because he gets  into a fight with the dad after he left the house and he yelled in anger i’ll kill you, so jurior 8 tell them eirler on in the play that anyone can say that and junior 3 just proved his point.

The falling action ultimately resolves the conflict by juror 8 breaking down all the evidence and making everyone  plead not guilty. It’s a  person vs. society type of conflict that’s driving this story.I say this because it is one man that believes that the boy is not guilty, and he is trying to convince 12 other hot, tired angry men that just want to leave the courtroom and go home that the boy is not guilty.

I am interested with your post, “Plot Analysis of 12 Angry Men” because the protagonist sounds very interesting.

One sentence you wrote that stands out for me is, “He is upset trying to figure out how he can explain why the boy is not guilty of killing his father.He meets these forces and pressures by deciding to take every single part of the evidence and breaking it up to prove he is not guilty. ” I think this is interesting because I want to see how he will prove the boy’s innocence.

Have you read the book Inherit the Wind. https://www.goodreads.com/book/show/253264.Inherit_the_Wind. I think you might be interested in this because ti is a similar genre to the book you are talking about right now.

Thanks for your writing. I look forward to seeing what you write next because I enjoyed reading this response and I want to read more responses by you.

Dear Mathew,
I am interested in post because I enjoyed the way you explained your thoughts, and used quotes to help the reader picture the events that are happening
One thing you said that stands out for me is: “ junior 8 is describing one of the senses of murder and jurior 3 gets fed up with this and starts arguing with him, and junior 8 cames back with calling him names and junior 3 get really angry and tries to punch him but the other jurors hold him back” this helped me to picture the interactions between junior 8 and 3.
Thanks for your project. I look forward to seeing what you write next because I enjoyed your use of imagery to explain your thoughts.

I really enjoyed how you explained the book and the situation they were in, I remember reading this book and watching the film in seventh grade and you did a great job explaining the events. and stating how the men were feeling, I remember it got me mad how they didn’t care for the case as much except for juror 8. overall, great job and continue the great work.

Great response! I look forward to seeing you right the next book because I really like you tell your story with imagery.