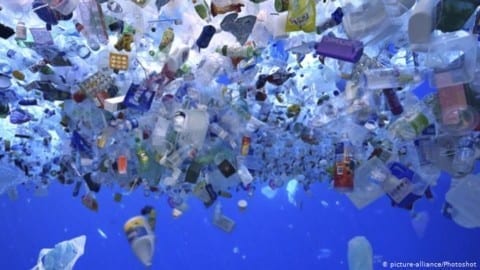 Many people have been misinformed that once plastic items are placed in the blue bins that they are recycled and transformed into other useful items. Unfortunately this is not the case. In the past, China has taken our plastics and disposed of them in China creating other items. Starting January 1 of this year China has stopped taking our plastics leaving recycling companies with no where to dispose of the billions of plastic items. Many plastic companies are now taking our plastics and dumping them into landfills or shipping it to places like Vietnam where they get “recycled.” The plastics have a very rough journey from America to Vietnam and a lot of the plastic waste gets washed overboard in the rough seas.

Although our oceans seem to be choking in plastics there is still hope. The Ocean Cleanup Foundation aims to clean up and recycle 50% of the Great Pacific Garbage Patch within five years. Places like San Francisco are starting to ban single use plastics. Millions of people are realizing that the issue of plastics isn’t going away and are speaking out and beginning to use reusable items such as metal straws, glass containers, metal water bottles, and canvas bags. The problem of plastics in the oceans won’t go away overnight and it is important to understand how small changes in individual lives create a message that many will follow. Hopefully one day there will be a large enough push for legislation across the world to make the oceans healthy for generations to come.

Dear Pauline,
I am glad you to decided to write and tell about such a major topic, I believe it’s so important for people to know that we ourselves have been polluting our beautiful ocean. Poor sea animals have been killed due to all the plastic waste that is thrown into the water.

One sentence that stood out to me was “According to seeturtles.org many sea turtles mistake plastic bags for jellyfish and eat the plastic bags.” This stood out to be because this means that due to cruel humanity throwing waste like plastic into the ocean, poor sea turtle’s mistaken it for food and end up having their digestive system blocked, causing them to die.

I greatly appreciate you writing about this sensitive topic, your words should be heard and spread. I believe this is a very important topic that should be continued to be addressed, I look forward to seeing more of your writing.

Thank you, Pauline, for referencing the plastic garbage patch. I know if I were a turtle trapped in the Great Pacific Garbage Patch, I would be very mad at the organisms who made this garbage appear. Who wants a slow and painful death when dying because they are choking? It must be scary for the other ocean animals that see the patch as a large animal trying to kill them if they get close. I never thought the pacific garbage patch was real. I first read it about in The 8th Continent by Matt London, where some scientists created a chemical compound that transformed the trash of the Great Pacific Garbage Patch into a green continent where plants and animals could live. If only scientists could make a compound like that in real life, this problem could be solved. But yes, I agree with Sandra that we need to educate everybody that this is a real thing out there. Because your and Sandra’s posts, I will educate all the people I meet about how plastic recycled affects the Great Pacific Garbage Patch. This is a very educational article, so how can we put this article out for all to be seen?

Hey Pauline, first I wanted to say that I loved your article. I think it is so incredibly important to talk about this huge problem we as humans are facing. I just want to ask how can we find an easier more efficient way of recycling? Another question i have is how can we educate the people, not only making them aware of what is happening in our society, but how it will eventually effect the entire planet? I read this article that gives basic ideas of how we can educate other people of the importance of not only recyling but keeping our enviroment clean and healthy.
https://www.epa.gov/recycle/how-do-i-recycle-common-recyclables