Plastic Bags Are Gonna Stay For A While

Home Plastic Bags Are Gonna Stay For A While 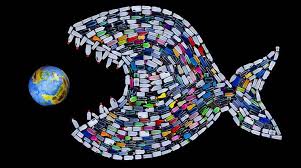 Plastic bags have been a staple when buying goods for many years. This has unfortunately lead to a downhill path.

According to the Environmental Protection Agency, the United States alone used and threw away 4 million tons of plastic bags and wraps in 2017. The vast majority of it was not recycled. This creates landfills filled with plastic that take up to 1,000 years to decompose. These landfills are so packed that plastic is taken and carried by the wind onto rivers, lakes, oceans, trees, ect. People who don’t care enough to properly dispose of their plastic are also responsible for plastic being where it shouldn’t. Stray plastic bags are able to block waterways or damage electrical wires, and most tragically, end up being in a poor sea animal’s stomach.

However, people recognize that this shouldn’t be happening and are actively trying to fix the issue. New York governor, Andrew Cuomo stated “For far too long, these bags have blighted our environment and clogged our waterways” in a proposition to ban plastic bags last year. New York was successful in banning it along with a growing list of other places. California, Hawaii, Oregon, along with 400 towns, counties, and cities have banned plastic bags completely or have at least placed restriction on them. Although banning plastic bags would help the environment, there’s also a downside.

Store owners and workers of the plastic bag industry are going to be hit negatively with the effects of a plastic bag ban. For store owners, plastic bags are cheap and allow customers to buy many items because of how stretchable and resilient they are. Since paper bags are more expensive, they might have to charge customers more, and no one likes to spend more money than they’re used to. According to the American Recyclable Plastic Bag Alliance, 30,000 American work in plastic bag manufacturing and recycling. If plastic bags were to be banned, then they all risk losing their jobs. For this reason some states have passed laws to prevent the banning or taxing of plastic bags.

Although there are reasons to keep plastic bags, we cannot deny the fact that plastic bags are causing enormous problems when it comes to littering. Plastic bags are not biodegradable, but paper bags are. However, the complete ban of plastic in exchange for paper would also cause problems. In my opinion, the way to fix this issue is by reusing the same bag, whether it be plastic or something else. That way plastic could still be created without the crazy amount of litter. To conclude, it is our job to stop the suffering of our planet’s animals and clean up this mess.

Plastic Bags are a classic dilemma today because of the amount of jobs in the plastic bag industry. You said “it is our job to stop the suffering of our planet’s animals and clean up this mess.” I completely agree. We need to ban plastic bags and a way to support the people who would lose jobs. There’s no other option, because by 2050, if nothing changes, there will be more plastic in the ocean than fish.

Alvaro! Your post is so interesting. This is such an important topic that not enough people are talking about. I am very fond of the ocean and all of its creatures, and I find it so sad when I see pictures of a seals stomach cut open with pure plastic filling it. I am also very involved in ocean conservation, and our trash may be the biggest problem that our ocean faces. This article really goes into detail and explains all of the facts and evidence. Thank you for spreading the word.

I am intrigued about your post, “Plastic bags are gonna stay for a while” because it’s an issue that hasn’t had as much attention as it should have. This is an issue that affects us, the environment, and animals so negatively, that if something isn’t done in the near future, there might not be a chance at recovery.
One sentence that caught my attention is: “…it is our job to stop the suffering of our planet’s animals and clean up this mess.” I agree with this because we are the ones responsible for creating an issue that shouldn’t have existed in the first place.
Thanks for your writing. I look forward to seeing what you have in store in the future because you pointed out who and what is affected by this issue. I also enjoy the insight you included on the topic.

Dear Alvaro
I genuinely enjoyed reading your post “Plastic Bags Are Gonna Stay for a While,” because this topic is about something that more people should address.
One sentence you wrote that stands out for me is: “To conclude, it is our job to stop the suffering of our planet’s animals and clean up this mess.” I like this sentence because i think it overall summarizes what you talked about. You also include your own personal opinion and what you believe is right.
I look forward to seeing what you write next, because I liked reading your post. I liked it because I would have not expected you to write about this topic. I really like how you composed your post, and how you used multiple sources as your evidence.
– Diana Zuniga

Dear Alvaro
I am commenting on your post, “Plastic Bags Are Gonna Stay For A While,” because I am very concerned with the amount of plastic polluting the earth. I am aware and worried about the effects that plastics have on the environment. I am glad to hear about the efforts to recycle the plastics. One sentence you wrote that stands out for me is: “To conclude, it is our job to stop the suffering of our planet’s animals and clean up this mess.” I think this is inspiring because it makes hope seem in reach. It also provides a reason for recycling. Thanks for your writing. I look forward to seeing what you write next, because I feel that you will continue to address issues that need to be addressed. I also enjoy your writing style and word choice.

Thx bruh
U making me feel sum typa way
Could I take you out for dinner some time?

Dear Alvaro:
I am interested by your post, “Plastic Bags Are Gonna Stay For A While,” because you brought up a topic that not alot of people talk about .
One sentence you wrote that stands out for me is: “People who don’t care enough to properly dispose of their plastic are also responsible for plastic being where it shouldn’t” I think this is sad because people do not realise the damage they are causing.Thanks for your writing. I look forward to seeing what you write next, because you bring up the underlying topic that people stray away from
Bryan nunez

Dear Alvaro
I am very interested by your post, “Plastic bags are gonna stay for a while,” because you brought some interesting information that caught my attention. One sentence you wrote that stands out for me is: “Although banning plastic bags would help the environment, there’s also a downside”.
” I think this is thoughtful. Because Everything that has a good side also comes with consequences or a bad side.
Another sentence that I found interesting was: “If plastic bags were to be banned, then they all risk losing their jobs.” This stood out for me because I have family who work in factories making these types of bags and it would impact them negatively if this happens.
Thanks for your writing. I look forward to seeing what you write next because they caught readers attention and it’s very interesting.