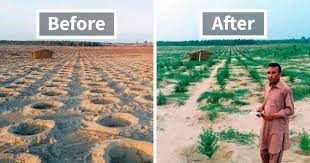 Pakistan is one of the most susceptible countries when it comes to climate change. Its citizens, on the other hand, wish to change that. The Ten Billion Tree Tsunami program was begun in Pakistan in 2019, with the objective of planting 10 billion trees by 2028. The countrywide initiative, which has already planted one billion saplings, is a follow-up to a campaign that began in the province of Khyber Pakhtunkhwa in 2015. Residents from all walks of life are now getting part, planting and maintaining 21 different types of trees around the country, from toddlers to politicians. Other environmentally friendly initiatives, such as renewable energy and electric taxis, are also being funded by the government.