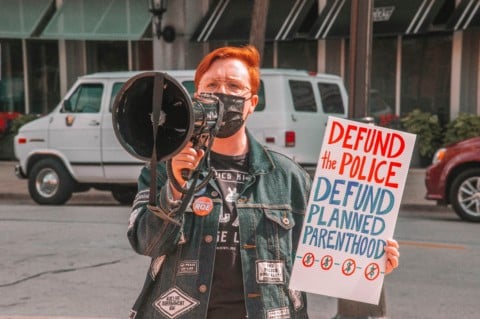 Planned Parenthood is a large discussion in today’s society. The right to women’s reproductive health is necessary. A lot of people just think that the only thing that planned parenthood does is abortion when in fact they do much more than that. They educate both men and women, do screening for cancer, and much more. Planned Parenthood said that they will be withdrawing from federal funding. Planned Parenthood receives about 60 million dollars annually through federal programTitle X. Title X is designed to prioritize low income families who may not otherwise have access to the appropriate health care.  It was enacted in 1970 during the Nixon administration.

“The funds have enabled the group to provide more than 1.5 million low-income women each year with services like birth control and pregnancy tests, as well as screenings for sexually transmitted diseases and breast and cervical cancer.” (Pam Belluck).

Planned parenthood receives the most money out of many other group and it serves 40% of all title X patients. In August of 2019 Planned Parenthood will no longer be receiving funding from title X. Title X has made a rule that says while clinics accepting Title X funds can take to their pactins about abortion, but they are not allowed to refer them to a place where they can get an aboartion. The withdrawal from title X does not mean that planned parenthood will no longer get any money, their annual reports from 2017/2018 shows that they received $500 million from Medicaid. “The Department of Health and Human Services said that such an intermediate status would not be acceptable. It said that organizations had until Aug. 19 to submit an “assurance and action plan” showing they intend to make “good faith efforts” to comply with the new rule.” This “rule should not be in place and Title X  continually should be giving planned parenthood the funds. This is a major political issue in our society that needs to be talked more about.

Dear Mae,
I am in agreement with you about your article, “Planned Parenthood” because this was a way for many to get some sort of professional help with it being covered with some insurance they can receive. But now that some things aren’t offered and costs are being cut it starts lacking in its departments and people who are low income can’t receive the treatment they need or advice.

One sentence that you wrote that stands out to me is “Title X funds can talk to their patients about abortion, but they are not allowed to refer them to a place where they can get an abortion”. I think this is important to look at because some women may need this because they are not financially, mentally, physically ready for a child.

Thanks for your writing. I look forward to your next writing because this was something I did not know so it is nice to be informed of these political changes that are happening. It is quite unbelievable that they would cut costs of an important organization so hopefully, there are alternatives for low-income families.