Home Pilgrimage to Mecca During COVID-19 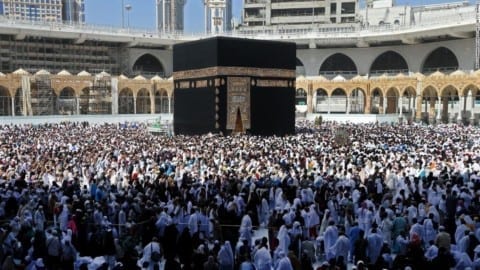 On July 28 2020, the annual Muslin pilgrimage known as the Hajj officially began. Except, during a global pandemic, the event had quite a few restrictions and safety measures in place to ensure that this holy time for Muslims did not evolve into a super-spreader for COVID-19. However, the decision to open Mecca to the public was hotly contested and debated by officials from all over the world. Many were wondering “Is Hajj worth the risk? and is it really safe?”

Many would argue that this event is definitely worth the possibility of exposure since Hajj can be considered one of the most important acts that any Muslim could perform in their life. According to Bloomberg’s Saudi Arabia correspondent Vivian Nereim, “It is considered to be one of the five pillars of Islam. It is actually obligatory for every Muslim to perform the Hajj once in their life if they’re able to financially and physically” (“What”).

In the name of religious freedom, one could argue that restricting Muslims from participating in the pilgrimage to Mecca is an infringement on their beliefs and a hindrance to their ability to “wipe clean past sins and start anew before God” (Batrawy). This is why many believe that those who are willing to go on the pilgrimage this year were also willing to take the risk of infection due to the great importance of the journey to their faith.

Still, the argument remains that if the pilgrims at Mecca super-spread among themselves, won’t they also infect the surrounding community, who never made the decision to take risks and possibly expose themselves? The possibility of this result stresses the importance of safety precautions at every step of the pilgrimage.

In fact, if insufficient measures were taken, the Hajj should have been considered unsafe but it continued through the end of July into early August of this year due to significant changes to the pilgrimage as a whole, including a sharp decrease in the number of pilgrims granted access to Mecca as well as strictly enforced social distancing, quarantining, and sanitization (“Pilgrims”). The first step taken by Saudi officials was to limit the amount of people making the pilgrimage to 1,000-10,000 people, including “about 30% Saudi nationals and 70% are foreign citizens who reside already in Saudi Arabia” (“What”).

Nobody participating in the Hajj this year came from outside the kingdom. This is a minuscule amount of pilgrims compared to the 2 million that Mecca hosts on average each year. These people were also vetted using an online system that ensured they had no dangerous health conditions and were within the 20-50 year age limit.

The second drastic measure taken to ensure the safety of the people was the sterilization of small pebbles to throw at stone pillars that “symbolize the repelling of evil” (“What”). They were distributed to pilgrims in pre-sealed packets and sanitized. These drastic safety measures implemented by Saudi officials and health professionals give a foreign or non-muslim audience an idea of just how important the Hajj must be in order for it to take place in the height of a global pandemic.

However, the questions of if the pilgrimage was worth the risk and if the measures taken were significant enough to eradicate the possibility of a virus outbreak remain widely unanswered. Instead, more questions grew from the old ones, questioning the bounds of religious expression and the significance of pilgrimages as a whole.

If religious journeys are incredibly important to a person’s faith, should they be able to take the pilgrimage while putting themselves and those around them in danger? And most importantly, what amount of safety precautions separates religious freedom from reckless endangerment?

I am very interested with your post because I had completely disregarded the effects Of Covid-19 on religious experiences such as this pilgrimage to Mecca. I found it intriguing that the Hajj was still held despite the high risk of exposure and infection. One thing you mentioned that stood out to me was: “restricting Muslims from participating in the pilgrimage to Mecca is an infringement on their beliefs.” Previously, I had know that this pilgrimage was a popular expedition among Muslims, but I did not realize that This journey is a way for great spiritual growth that many desire to experience in their lifetime. I liked how you explained the proper measures taken to allow for the best engagement in worship while also attempting to maintain the health and security of the pilgrims in attendance. These procedures emphasize the extreme importance of the Hajj to Muslim culture, despite any criticism from outside sources.
Thank you for your project, Ellie! I look forward to seeing what you write next. I loved your careful insights about both sides of this topic and would like to see more comparisons in your future writing.

I like that this article brought up a lot of questions that i had never thought of, specifically about religious events in the pandemic and the difference of how each kind is being handled. For example, a lot of people who are attending in person church right now are usually criticized or mocked to the point that many churches closed because of the backlash. But in this case, the Mecca was able to be conducted even though there were arguably more risk in holding it. I think how each of these worship methods is seen also connects with culture and How each one has a certain importance in the religion. Objectively, church is seen as a more casual affair while the Mecca is a huge event that even non Muslims can see is a very significant event. It’s interesting to see the steps taken to preserve the practice even now. I really liked the mention of hoe they sanitized everything rigorous, including the tiny pebbles used in the ceremony. I thought that was a great way to demonstrate just how serious holding this ceremony was. But also how evidently important it is. Overall, i love the connection to pilgrimage and the thought provoking questions this raised about seemingly insignificant events being important enough to risk getting a disease for, and which events qualify.