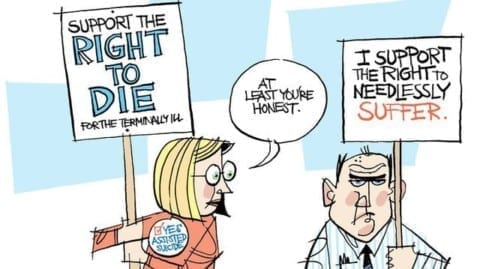 There’s been an accident. You’re stuck in a burning car on the side of the road, and it takes first responders’ two minutes to get you out. This leaves you with 3rd and 4th degree burns and a less than stellar chance at survival. Chances are you’ll die of infection within a year, while suffering from unbearable pain the entire time. It’s in situations like this where a moral dilemma comes into play. Should the patient, be they in unbearable pain, be able to ask the attending physician to end their life? This is an argument that physicians have dealt with for years, do they do everything in their power to save a life or do they end a life when the patient is terminal? Is attempting to relieve the pain enough? It is my belief that a patient should be given the option to end their own life when faced with injuries that hinder their ability to live outside a hospital or are facing unbearable pain.

Physician assisted death has been an ethical problem for many years. Doctors are sworn to do all they can to save the lives of their patients, but when does that become too much? When do they cross the line and make the lives of the patient miserable? In a similar situation to that in the introduction, Jennifer Cowart died in a burn center after receiving 3rd and 4th degree burns to 95% of her body. She had lost multiple extremities and faced organ failure, yet her physicians kept her alive until she died a year later due to an infection of her wounds. Jennifer begged for death and she was denied at every request, even though her chance of survival sat at a measly 10% (Levin, para 6) This kind of treatment is unethical, forcing a terminal patient to live in excruciating pain until death is not the right thing to do. A patient should have the right, or at least the option to end their life. This option is only legal in five states and the District of Columbia as of now. Among these is California, where a patient must submit two oral request fifteen days apart and a written request. This helps prevent “in the moment decisions” that could otherwise cause unwanted deaths (CNN Library, para 5).

Legally this is a tougher subject. The United States Court of Appeals for the Ninth Circuit and the Supreme Court have conflicting views.  The Compassion in Dying v. State of Washington case ruled a law against assisted death unconstitutional. Later a three judge panel of the Ninth Circuit ruled the law constitutional, the case was then reviewed again by an eleven judge panel of the Ninth Circuit and was again ruled unconstitutional on the grounds of violating the 4th Amendment and due process with the argument of violating a patient’s right to liberty of ending their own life. When taken to the Supreme Court, the ruling was overturned again and ruled constitutional according to Findlaw.com. Low and behold this is not the only case concerning the matter. According to Levin of LevinLaw.com there are three other court cases that the Ninth Circuit cited to make their decision for assisted death (para 18). These arguments include the patient’s right to refuse life saving procedures, a person’s right to define their own existence, and the pursuit of happiness. Claire Andre and Manuel Velasquez from Santa Clara University also agree with these arguments, stating that all persons have a moral right to choose freely what they will do with their lives as long as they inflict no harm on others (Andre and Velasquez, para 3). Each of these supports the claim that physician assisted death should be legal. If a patient can deny life saving procedures then why don’t they have the right hasten the process?

Physicians are, however, regarded as care givers. Professionals that will do whatever they can to save a life. It is also important to note that the procedure to ends one life is usually painless but lethal dose of medication. In Oregon only one patient out of 341 was reported not to die after receiving a lethal dose, and nineteen vomited the medicine according to (“Ten Years of Assisted Suicide in Oregon” para 5). Offering a small, but real chance of malpractice. According to Nicanor Pier Giorgio Austriaco of the Catholic University of America “Both euthanasia and physician-assisted death would undermine the medical profession by eroding the trust of patients in their physicians as caregivers. If doctors were permitted to engage in practices that harm their patients, then patients would never know if their doctors were truly acting in their best interests.” (Austriaco , 148). This could create a distrust between a physician and their patient. But is this issue as simple as trusting a physician to judge whether you live or die? I don’t think it is. Personally I believe that, like in California, a patient should have to request their death on multiple occasions and in multiple manners (written, speech, etc.), the case then should be reviewed by a panel of physicians that could vote on the act of PAS based on the pain the patient is in, the economic effects of the treatment on the patient if they live, and a psychological evaluation. This could help keep the trust of the physician and keep the malpractice rate of such a procedure to a minimum. Ending the pain of a patient without causing any more. From a moral viewpoint there are two opposing sides. Do humans preserve life at all cost or do they end the unbearable suffering of their peers. This is where most people are split. The preservation of life is human nature as it is to all species, we have emotional attachments to each other that make letting go of loved ones and those we know a terribly hard thing to do. Assisting in another’s death also has an effect on the friends and loved ones of the deceased, causing emotional pain to those close to the patient. But as humans we are also filled with compassion, we don’t want to watch those we love suffer uncontrollably and die without dignity. We owe it to our loved ones to let them go on their own terms. To give them one last victory in a string of defeats.

The argument for assisted death is a complex one filled with court decisions and moral dilemmas. It challenges human nature and our emotions. Physician assisted death is something that needs to be allowed to end the suffering of those who have lost their will to live due to the pain they endure every moment of their life.

I respect your choice to analyze such an in-depth and controversial topic and think you do an excellent job of evaluating both sides of the dilemma. I agree with you, that people should have the right to determine their own course of life and how to proceed in cases such as being faced with a terminal, often painful, illness. As referenced by the complex legal process for these laws in your paper, it seems that the moral issue is perhaps not the more complex of the two. The main point seems to be that there is no absolute case in which PAS is applicable, and with so many different scenarios and hypothetical situations, it is extremely complicated to draft legislation that is applicable to a broad base. I agree, the system in California seems to be the most desirable, with a multi-step process that prevents impulsive decisions. Overall, I think you do a nice job of objectively evaluating an extremely complicated topic.