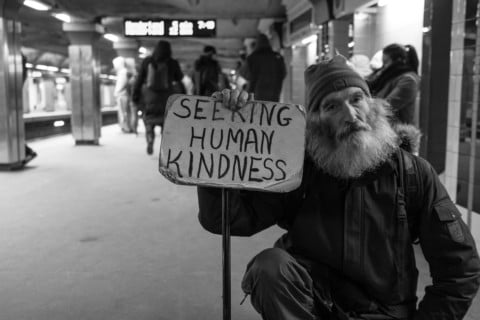 We all know how huge Philadelphia is, but did you know that they have one of the smallest homeless populations among our nation’s biggest cities? You may be wondering, how do they do it? The policy that had the largest impact on their success is the establishment of homeless shelters that are open 24/7. The standard across the United States is for shelters to open at 7:00 pm and close at 7:00 am. At 7:00 am sharp, people are woken up and told they needed to leave. This gives the homeless no place to go for the remaining hours of the day. It is during this time outside of the shelter that conflict resolution turns to street violence because there was no safe space to resolve issues.

While this 24/7 shelter plan is a solution that many cities across the nation should take cues from, it isn’t as simple as leaving the shelter doors open longer. Most shelters are stretched thin as is, and allowing people to stay inside all day would only add to their workload. If these 24/7 shelters are going to work, they need to be properly staffed and able to care for the homeless all day while also maintaining the work that needs to be done cleaning and maintaining the facilities.

Philadelphia has proven that keeping shelters open all day has an impact on the number of people without homes. I think that this model could work for cities across the nation. All cities need to do to put this plan into effect is show some initiative. This plan has been proven successful, but it isn’t easy. Cities need to find the money to properly staff shelters and ensure that there are enough 24/7 shelters to make an impact.

I live in Salt Lake City, Utah and I know that we could implement this plan. Homelessness in Salt Lake has nearly doubled since 2016, so it’s high time that we consider doing something about it. This past December, Operation Rio Grande was put into place to help reduce the homeless population. More than $55 million was allocated to helping the homeless population, but only 18% went to housing and services. 80% of that money went directly into policing, jail beds, and court costs. Salt Lake City has the resources to make Philadelphia’s plan a success, our policymakers just have to decide that that is where their priorities lie.