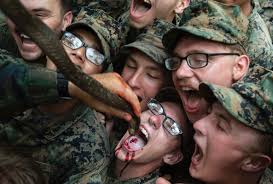 PETA in its statement to General Berger stated, “There are also vegan options too with the jungle being rich in fruit and other lush, edible vegetation.” I do not believe PETA should get involved with what the military should or should not do when it comes to training Marines how to survive in the jungle, or survive in general if they ever get behind enemy lines. Yes, it may be disturbing to cut off a cobra’s head and drink it’s blood, but when you are behind enemy lines trying to survive in the jungle with no water in sight, or no drinkable water, what other options are there? Humans are animals as well and we are at the top of the food chain. Marines learn how to survive by performing the act itself so they can have confidence and experience later on if they ever need the training. Hands-on experience will be a lot more beneficial and helpful as opposed to having a PowerPoint to Marines saying that it’s ok to drink cobra blood because I said so.

In conclusion, I believe PETA, who has killed a lot more animals in their shelters than Marines have during this training exercise, should stay out of this. At the end of the day, when you are stranded behind enemy lines and looking for something to eat, would you rather try to find a plant that is edible and won’t harm you, or would you want to find an animal that you know for sure you can eat if cooked right, or raw. Some hazardous plants can look similar to safe plants and could be a fatal error. Eating other animals, such as chopping off a cobra’s head and drinking its blood for rehydration, as well as being able to eat it, is far more valuable. Animals have meat, and meats have protein and other essential nutrients that can sustain life. You’re trying to survive and the last thing you would care about is whether or not you’re going to piss some people off for killing an animal and eating it to survive.

Jimmy your right. PETA are hypocrites who like to poke their nose into other people’s business. While I can’t accept punishment of an animal I am an avid hunter. There is nothing wrong with taking the life of an animal in a respectful way. The people who think its not are living in a fantasy world, and don’t understand where half their stuff comes from. Don’t tell me I can’t go hunt while you eat your cheeseburger, or where your leather coat. There is nothing wrong with tradition, and although I don’t plan on joining the military I have deep for people who serve. God bless america. https://www.washingtontimes.com/news/2017/mar/20/hypocrisy-of-activists/

As for PETA’s shelter, please watch this: https://www.youtube.com/watch?v=WbzT6qi6ldc&feature=youtu.be. PETA operates one small shelter—a shelter of last resort for animals who need euthanasia to end their suffering (many of whom have been rejected by other facilities). This includes dogs who are aggressive and unadoptable because they have been kept chained their entire lives; feral cats dying of contagious diseases; animals who are wracked with cancer; elderly animals who have no quality of life and whose desperate guardians brought them to PETA because they can’t afford to pay a vet to euthanize them; and the list goes on. A painless end is a kindness for these animals, and the services PETA provides are vitally needed in an area where many people can’t afford to take their animals to a veterinarian.