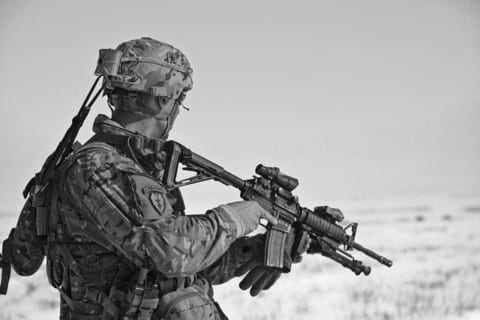 Since 1945 the United States has fought five major wars: Korea, Vietnam, the Gulf War, Iraq, and Afghanistan. This isn’t even including the unofficial interventions and conflicts that the our military employs in around the world. The U.S. military is currently engaged globally with a network of 800 bases spread across 172 countries. According to an article from the Chronicles Magazine, “By the count of the Pentagon, at the end of the last fiscal year about 291,000 personnel… were deployed in 183 countries worldwide, which is the functional definition of a military uncontained… the country’s foreign military commitments, especially its wars, just keep humming along.”

Perpetual war is the lasting state of war with no clear conditions that lead to a conclusion. It seems as if the interventions our military partakes in relates to the acquiring of resources or the desire for a country to have a regime change to an American ally. This political cartoon displays the United States’s advance on Syria, with the notion that perpetual war will bring perpetual commerce. Dominic Tierney, a professor at Swarthmore, identifies the change in the nature of warfare that has led to this incessant fighting in an interview  done by Vox. He says:

“We’re still stuck in this view that war is like the Super Bowl: We meet on the field, both sides have uniforms, we score points, someone wins, and when the game ends you go home. That’s not what war is like now. Now there are tons of civilians on the field, the enemy team doesn’t wear a uniform, and the game never ends. We need to know there’s no neat ending. The costs of this problem have been so catastrophic for the United States, in the form of thousands of military lives and billions of dollars spent. It’s time we fundamentally rethink our vision of what war is.”

According to an article from CNBC, America has spent $5.9 trillion on wars in the Middle East and Asia since 2001. In those seventeen years, we only have one real definitive victory: the Gulf War. Trillions of dollars spent, thousands of lives lost, and no end in sight.

The solution for perpetual warfare is not a simple one, however taking small measures can certainly solve some of the problem. First and foremost, it is important to understand that there is no such thing as perfect security and a huge military does not automatically translate to it. Secondly, the Pentagon is supposedly a defense department, but in the last couple decades it has become a war department. Congressman Dennis Kucinich ran for president in 2004 and 2008, during which he called for the creation of a Department of Peace. Washington laughed at the suggestion, but seventeen years into our latest set of wars, what was so funny about that suggestion? Isn’t it better to have a whole group of tacticians attempting to wage peace and diplomacy instead of war? Finally and perhaps most importantly, the United States Constitution outlines the process by which our country goes to war, and Congress is charged with voting on a declaration of war, only after which can we pursue global conflicts. If we had followed this rule, the U.S. technically has not –and probably wouldn’t have– fought any wars since World War II. Congress would have had to vote on it, and since practically nothing can get through our legislature with agreement, it’s unlikely we would’ve been in our current state of incessant war. Additionally, making war an issue that our Congressmen have to vote upon puts the issue slightly more into the citizen’s hands and makes the general public more aware of what our government is engaging in globally.