Peacefully Protesting in the NFL

Home Peacefully Protesting in the NFL 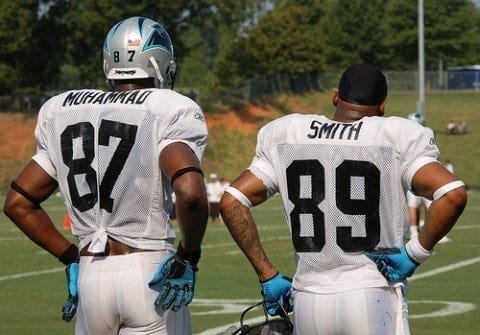 Protesting in the NFL is completely necessary. As players, their voices are important and the decisions they make on and off the field can either make or break their football careers. The fact that so many Americans are angry about this is understandable because we were all taught to respect the flag and to stand and recite. Society has to understand that not everyone is okay with standing for words that don’t apply to them and their rights.

According to Maggie Astor in the article “How N.F.L. Sponsors Have Reacted to ‘Take a Knee’ Protests” , this debate has been simmering since last year when the San Francisco 49ers’ Colin Kaepernick knelt to protest police brutality boiled over last week when President Trump declared that players that protest this way should be fired. So just because they’re public figures they are being denied their right to freedom of speech ? And this is fair because it’s their job ?

We have all been told as citizens we must honor our flag. What if we don’t believe the words that are being recited as we stand ? These players respect the Veterans who fought for our country , but they simply disagree with the things we have to say because these players, like many others, don’t feel the National Anthem was written for the freedom of all people. The National Anthem is another way to make uneducated Americans think they are free. It is another way to pretend America is perfect.

Senator Bob Corker of Tennessee in a New York Times article talks to reporters and explains how Trump “respects our country” but can’t seem to respect our country’s peace and how he could be setting us up for another war. The misuse of the Military is injustice to those who serve and according to “Unsilent Majority” on Twitter, we kneel to protect and honor the freedom of the Military as well. Trump mentions respect of veterans when he agrees with the immediate use of Military in situations where he feels violence is better than communication and he feels it’s okay to threaten other powerful countries putting our country at risk and throwing the Military on the lines to back up his threatening trash talk.

“We must act accordingly on the job”  they say. Meanwhile, our President is concerned about a peaceful protest and firing those involved when there are other things that need much more  attention.

If this longstanding tradition talked about the exercise of rights that were equally distributed among Americans there would be no problem for people to stand and find other things to protest against. This seems to be a big issue in today’s society because we are being taught the meaning of what we are saying and it just doesn’t quite fit the actions shown by authority and government.