Peace Stories from the War

Home Peace Stories from the War 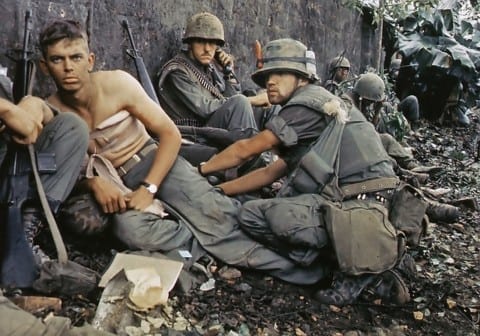 The book that I’ve been reading is called “The Things They Carried”. Chapter 1 recounts the Authors experiences as a young soldier drafted into the Vietnam war. The first chapter introduces his platoon members and their various routines. The narrator begins the first chapter by reflecting about Lieutenant Jimmy Cross known for carrying the letters of a girl named Martha. Lieutenant Jimmy Cross carries these letters because he wants Martha to love him though according to the narrator she does not. He reads the letters and dreams about marrying this woman. He wonders whether or not she’s a virgin. The narrator also introduces us to Mitchell Sanders a radio telephone operator or RTO who is responsible for carrying around the platoon radio, Rat Kiley a medic who carries around morphine and malaria tablets, and Henry Dobbins who carries around a machine guns. For now I’m starting to like the book, it’s not bad. This book may have somebody feeling sensitive because the feeling of loving somebody but not knowing if they love you back may mess with your head.An example of this is on page 1-2 “She often quoted lines of poetry she never mentioned the war except to say Jimmy take care of yourself, the letters weighed 4 ounces, they were signed love Martha but Lieutenant Cross understood that love was only a way of signing and did not mean what he sometimes pretended it meant.

Readers may look forward to reading the rest of this book because it’s interesting and may put some people in a certain mood. The narrator explains that there were “peace stories” from the war. One story the soldiers tell each other is about a man that goes AWOL and starts living with a Red Cross nurse, and eventually returns to the war because the peace was hurting him and he wanted to hurt it back. Many memories come back to the narrator and though some are horrifying others are not. There are memories of Mitchell Sanders peeling lice off his body with a finger nail and mailing it to his draft board. There are memories of Norman Bowker and Henry D obbins playing checkers, a game that was clear, without tunnels, mountains and jungles, There were rules and the soldiers would gather around to watch them play. Once the soldiers asked an “old poppa-san” to guide them through a minefield and after they have all survived a chopper came to take them away leaving the old man behind. Though the soldiers would relax when not fighting the narrator compares the anxiety the soldiers felt to a sort of acid ruining their organs. This was the boredom they felt.

After this part readers will look forward to reading the rest of this book because it’s interesting and it would put you in a certain mood and will have you thinking a lot about life itself and the way things go in certain people’s love life. “The morning after Lavender’s death in the steady rain, Cross crouches in his foxhole and burns Martha’s letters and two photographs. He plans the day’s march and concludes that he will never again feel fantasies”. “While the soldiers wait for the helicopter to carry Lavenders body away they smoke his marijuana, they make jokes about Lavender’s tranquilizer abuse and rationalize that he was probably too numb to feel any pain when he was shot”. Lavender was a low-ranking soldier. What may happen in the end of the story from what I’ve read is that maybe Martha and Lieutenant Jimmy Cross may end up being together and the soldiers might try to get revenge for Lavender’s death.