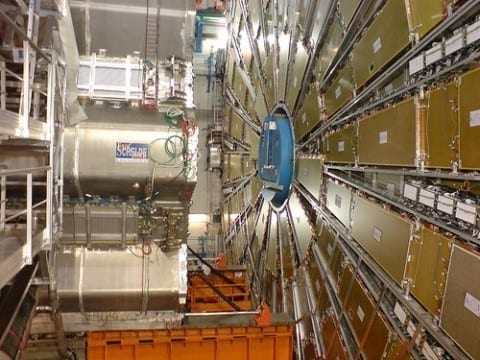 In 1998 the European Organization for Nuclear Research (CERN) started the construction of the Large Hadron Collider. The LHC is a particle collider that uses superconducting magnets to accelerate particles to near the speed of light. In order to speed up particles that fast, the LHC needed to have two 16.6 mile loops for particles to whiz around in opposite directions until they were at the optimal smashing speed. Once accelerated, the two particles are collided together in intersecting parts of the loops, which have special detectors to observe the pieces of debris from the collision. The debris is what scientists are studying.

It allowed physicists to test theories that before were impossible to test. A big theory being tested was the Higgs mechanism. The A Toroidal LHC ApparatuS (ATLAS) is one of the seven particle collision experiments dedicated to studying the Higgs mechanism. The Higgs mechanism called for an elementary particle, called a Higgs Boson, of an extremely small mass, with no spin, and decays into normal standard model particles. On July 4th, in the year 2012, scientists sped up two particles to the speed of light, then smashed them together. This resulted in an explosion of elementary particles, but one of those particles had a mass of 125 GeV/c^2  (1 GeV/c^2 = 1.783×10−27 kg), the expected mass of a Higgs Boson.  Scientists at the LHC went ballistic and the search for more Higgs continued. This mysterious little thing – that may be responsible for unexplained phenomena in our universe – is being coined as “the God particle”, and people are paying the physicists at the LHC billions upon billions of dollars on this research.

CERN spent $6 billion dollars on the construction of the LHC, making it the third most expensive thing built. Yes, that does mean this machine cost more than the Burj Khalifa in Dubai.  Each year the scientists at the LHC need to spend $1 billion dollars per year for operation costs. The completion of the LHC was one of the greatest accomplishments of human engineering and construction, taking  nearly 15 years to build. The Large Hadron Collider is proof that people care about physics. From the dawn of human life, curiosity has fueled innovation and discovery. From the cavemen using tools, all the way up humans building supermassive science machines, curiosity has been responsible for humankind’s grand existence. It is why we should never stop funding the experiments being conducted at the LHC.