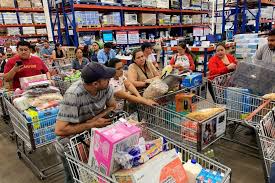 As we are in the crisis of Coronavirus, we have made many precautions to not get infected by natural causes or by others who aren’t taking care of themselves. We had become very flexible in the situation by moving the workplace of some people to work at home, at the same time for students to stay at home while keeping on attending the classes online.

From this, we were doing well and staying at home, until it came down to get supplies so that we won’t need to go a lot. This is a problem for many people because every time they get to the stores to replenish some more items that they need, the store gets out of stock. This comes from the conflict of toilet paper getting sold out, however, this is not the only item that is selling out.

In the New York Times, there’s a particular news report that talks about products that are for babies or newborns are selling out of stock which causes some other families that have still young ones to have no products for them to feed them. The name of the report is called “Families Scramble to Find Baby Formula, Diapers and Wipes.”.

It talks about that there’s this mother explaining that Until Catie Weimer’s baby, Arlo, was 4 months old, he would scream and pull his head away from the bottle every time she tried to feed him formula. If she got any of it into him, he’d vomit. He was born at 37 weeks, and she was already worried that he was on the small side when she learned that he had a milk protein allergy and was put on the hypoallergenic formula Alimentum.”

From the start, it was found for her in the can of formula, but when the outbreak started it got difficult to find enough amount of formula to buy at any store. This means that any product that is based on cleaning products for infants.

Besides that there are other products that are selling out like hand sanitizer, can base products, bread, and more. Also apparently there is a problem that includes why toilets are selling out quickly and are

that people are using other sources besides their main use. Many people use it sometimes as wipes or paper towels, which also is another reason why many people are buying too many pairs of roles.

There’s a phenomenon that is common in the behavior of a consumer called FOMO syndrome. That is explained in the report called “Why people are buying so much toilet paper amid coronavirus outbreak”. That mentions “Consumer psychology experts say the irrational herd mentality is fueled by social media and alarmist news coverage, according to the BBC.”

In conclusion, in my opinion, I understand why there are many people being reckless, but at the same time, I see that there are some people that are being reckless by not thinking it through. In each news report, I see that they share a common factor that each one holds, and that mostly some of the people are a “mid-high class“ are sharing info or solving a problem that can be solved very quickly.

I agree with the quote you added in your article. People will believe anything on social media and it’s scary. When all it takes is to keep yourself clean and keep your immune system strong and people are still going crazy, that’s when you know society has its priorities messed up. But it’s not their fault it’s social media. Someone will post something and people will believe it to be true. The scariest part is that it’s done so easily. People aren’t gonna stop going crazy though. So all we can do is prepare ourselves the way we should and let natural selection take its course. Fear is what drives these people to buy everything front the stores. But as long as you remember that fear is just faith in the wrong things you’ll be alright.

I am shocked by your article, because people are really taking this situation like it is doomsday. And thinking that personal care products and hygiene products are the savior. One sentence that stuck out to me was “There’s a phenomenon that is common in the behavior of a consumer called FOMO syndrome. That is explained in the report called “Why people are buying so much toilet paper amid coronavirus outbreak”. That mentions “Consumer psychology experts say the irrational herd mentality is fueled by social media and alarmist news coverage, according to the BBC.” this stuck out to me because I honestly agree with it. Social media’s dramatic approach to this caused fear and paranoia to everyone. Causing everyone to over populate themselves in toilet paper. Another sentence that stood out was “In another way to put it, there are many people that don’t need to be high class to solve a problem on consuming, there are the ones that see many ways to solve a problem one after another.” This second quote stuck out to me also because it’s very true. We shouldn’t have to be on the higher end of society to survive. And those who NEED the supplies should get their hands on it. Thank you for your writing, and I am eager to see what happens next with your writing.

Cesar great post! It is very important to inform people that we should not be buying all the supplies. You have a very good article I enjoyed reading! There is few grammatical fixes that could be made but overall, great job!