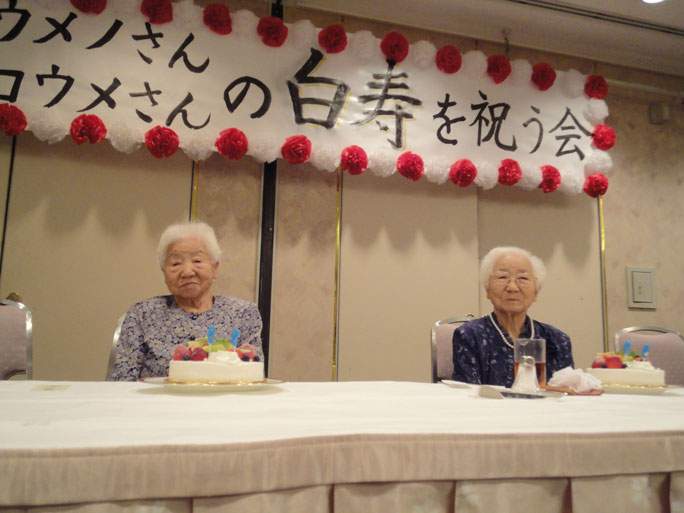 In the Article “ The World Oldest twins” I learned that On September 1, 2021, sisters Umeno Sumiyama and Koume Kodama celebrated a very important milestone. At 107 years and three hundred days old, the two became the oldest living identical twins in the world. The sisters didn’t really celebrate their birthday since they are from japan and growing up they were always bullied for being born together. What I find sad is that the twin sisters were separated from each other and only got to see each other for big family events like weddings or funerals. They reconnected in their 70’s but are currently living in separate nursing homes due to their old age. Both were really excited to receive the Guiness World Record certificates. Something that is really surprising is that twenty-nine percent of the Japanese population is over 65, and about 86,500 Japanese people are 100 years old or older.

I’ve always thought that having a twin is cool but now it blows my mind that out in the world there are twins who are 107 years old. They must have been through a lot in their life so it was interesting to find out about them.

I’m also a twin so the title of this topic really drew me in. I was saddened to read that the sisters were separated and only really started to reconnect in their 70s. Being a twin is something so unique and special. You really have a bond, especially identical twins. So it was sad to learn that they have only really been able to connect more recently. I was also shocked to learn that 85,000 Japanese people are 100 or older.

This topic really caught my eye. I love reading about world records. It reminds me that people are so unique. I liked how you included statistics about Japan, they were really interesting to read.

Thank you for sharing this interesting fact with us. I wonder is it the same for other identical twins, do they all have similar longevity. It is impressive that this oldest identical twin does not live together, so their long longevity is ruled out by the factor of a healthy diet and it must benefit from their shared identical DNA. You use some statistics of the Japanese average ages, so it is not so surprising that the oldest identical twin is from Japan.

Thank you for commenting on my post to answer your question researchers have reported that identical twins were close in age when they died but even so the majority died years apart.

I am curious how these two carried their lives because it is remarkable that both are still alive. I am curious if their longevity has something to do with their gene makeup, daily practices, or Japanese lifestyle. I am convinced it cannot just be luck.

I think this is very interesting, I’ve never thought about the oldest living identical twins and I like how you included how in their youth they were bullied for being born together and looking similar. I think a good title for a writing piece is almost as important as the writing itself and I think that your title was perfect it caught my eye and made me want to read more, I think that’s very important and I think your summary of it was perfect as well. I think it was also interesting hearing how they are today and how they got excited over the certificates, I think it was well written.

Your post drew me in immediately, Sayra! I agree that it is so cool to know that there are people in this world that are living at that age and even cooler to know they are twins. The fact that they were able to both survive that long, living completely separate lives is very impressive. I am not sure if I would like to have a twin just because I would depend on them so much. I really like your post and it would be interesting to know how many pairs of twins are close to that age.

There are not many twins close to that age but there were twin sisters who were also from Japan who previously held the world record for the oldest living twins they were Kin Narita and Gin Kanie. They were both 107 years and 175 days old it is sad that they both died back in 2000.

This post attracted me because my grandpa has an identical twin brother. It’s interesting to see this dynamic play out in the family and from the outside looking in. It’s odd, but unique.

I found this really interesting, I wonder why they were being bullied for being twins and why they were separated. Maybe it would be interesting to research the stigma on twins in Asian countries

Your post was so interesting to me! It’s crazy to think that not only are there twins out there who are over 107 years old, but a huge part of the population in Japan lives to a similar age. I think it would be really interesting to compare the factors in Japan versus other places to see why they live a lot longer than people in other places. I really enjoyed your post because it taught me something new.

Dear Sayra,
I am amazed by your post “107 year old Twins?” because it is amazing how people can live for more than 100 years! It is fascinating when twins make it to their 107th birthday.

One sentence you wrote that stands out to me is: “Something that is really surprising is that twenty-nine percent of the Japanese population is over 65, and about 86,500 Japanese people are 100 years old or older” because this shows that some Japanese people make it to their 100th birthday. This is impressive to me because I never knew someone (specifically twins) that live for 107 years.

Thanks for your writing. I look forward to seeing what you write next, because I like the way you provide other facts such as the Japanese population age. I would like to continue to know more about the twins and what is it like for them to be separated again.

This post is amazing! It’s disappointing that the twins never really got to spend that much time with each other, but at least they did get to reconnect. I think it would be interesting to compare the Japanese culture to American culture to see some of the reasons people are living so much longer there.