Outtake Through the Intake

Home Outtake Through the Intake 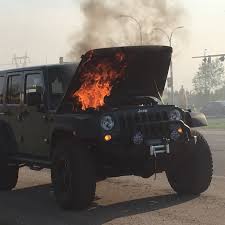 “Hey Scott, what car do you want us to check the diff fluid on?” Cody, my friend and WTC partner asked.

“Use the Wrangler and put it in stall 14.” He replied, starting the downward spiral that would be the rest of that day. I walked over to the tool crib to get a booster pack. These cars are always dead, would it kill them to charge them from time to time? I connected the booster pack to the battery, gave Cody the go, and nothing. It cranked once or twice but no luck, it was out of gas. Unsurprisingly, there wasn’t any in the shop either.

“Aye Brayden, you wanna get Connor and Zach to help with this Jeep? It’s outta gas.” I yelled, probably louder than necessary but I had to be heard over the various air and power tools being used.

“Sure man go grab some starter fluid and meet us out there.”, was the barely audible reply. I walked back to the tool crib, grabbed the container, and met them outside. Cody had disappeared somewhere along the way, probably for the bathroom.

“Okay, Zach go behind the Jeep to push it and give it a little help on the hills, Conner I want you to be in the cab to steer and manage the clutch, I’m gunna walk along next to it and spray the fluid into the intake and it should run off that, Alex just go stand off to the side we got you.” It was the master plan, thought up by Brayden. The thumbs up was given, Connor turned the key, clutch disengaged. Zach put pressure on the rear bumper. Brayden unleashed the can. This probably won’t work, no way it’ll run off straight starter fluid. Surprisingly enough it ran, for the first few feet anyway.

“AH!” a flash of blue and orange, “guess I don’t have arm hair now.” A four foot cylinder of flame shot straight out of the intake, singeing the hair off his hand and forearm. That was AWESOME! Sadly, I couldn’t voice such thoughts, instead having to act worried. “We don’t tell Ian about this, and definitely not Scott. Ever.”, Brayden said, having to cover himself the most since the plan was his to begin with. Downtrodden we pushed the Wrangler into the designated stall, told Scott it was in, pushed in of course, and continued with the mod.

Both teachers still have no idea this ever happened, the first outtake of many for my year of Auto Tech 1.