Our Right to Healthcare

Home Our Right to Healthcare 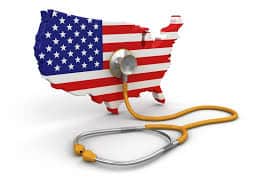 Everyone has the right to healthcare. Healthcare is a necessity and no one should be denied it. Eight percent of the U.S. population do not have health insurance, that is over twenty eight million people. The United States is the only country out of thirty six in the OECD that doesn’t have universal health care. There are positives and negatives that come with both sides of the argument. This creates a problem because the U.S. is one of the wealthiest countries in the world and yet it doesn’t have nationwide health care.

An important pro to this argument is instituting a right to health care could lead to a lower cost of healthcare in the United States. Public and private healthcare could be lowered by two trillion dollars in total savings. Based off a study by The American Medical Association shows that Canada and the United Kingdom (two countries with universal healthcare) spent less than fifty percent of the U.S. spent in 2017. Universal healthcare is possible, proven that it is beneficial by multiple other countries.

The con to this argument is that it could send the United States deeper in debt. Providing nationwide coverage could be risk and could rack debt up faster than it can be paid off. Former US House Budget Committee Chairman Paul Ryan states, “the explosive growth in our spending and our debt”. This explosive spending could negatively impact the economy and budget of the nation. No one should be denied healthcare, but does a nationwide right to healthcare risk to much.

Hey Luke,
I did a discussion on health care as well, and I totally agree with all of your points. One thing I think you could’ve added is more examples of health care situations so we can get a better idea. Here is a website I think might interest you. 🙂 https://www.modernhealthcare.com/

HI Luke
I am very agree with your opion about the right to helath care. I believe for everyone have access to good health care system is very necessary. Here is an artical I recent read about the importance of the universal health care(https://ieet.org/index.php/IEET2/more/chetty20130828) .
Sincerely
Hanson Hong

Hey luke,
I agree with everything you brought up in your post, i found this article that might help you expand your knowledge on the issue- https://www.palomar.edu/telescope/2018/02/28/should-the-u-s-have-free-universal-healthcare/

Hi Luke,
I really enjoyed your take on this current problem. I loved the comparison between Canada and America’s healthcare system.