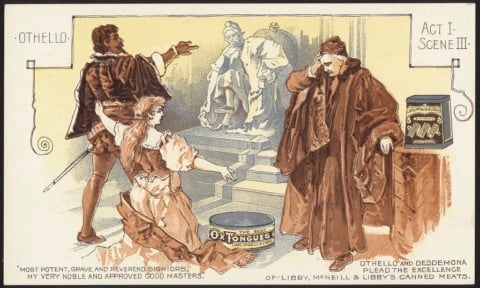 From the play Othello I chose lines 188-196 from Act I Scene 3. In this section, I played the character of Othello as he explains how he earned D’s love. In recording this passage I saw how important the vocal inflections and use of various tones changed the meaning of the passage. While reciting this passage I stressed the parts when Othello refers to himself as it is important while he is talking about the ways that he Desdemona. I also included different length pauses as different parts of Othello’s speech require a pause to dramatize or understand what is important. It was also important for me to keep a steady pace as in this situation of being accused of witchcraft, Othello remains calm to show he is sure in his response. Othello has a commanding and sure tone throughout the play to emphasize his importance and authority in situations. Through my reading of the passage, I reflected this tone of authority as he speaks to the Duke and Brabantio, her father. Through my recitation, I also wanted to emphasize the conviction that Othello shows through his speech and tries to draw from others when he speaks.