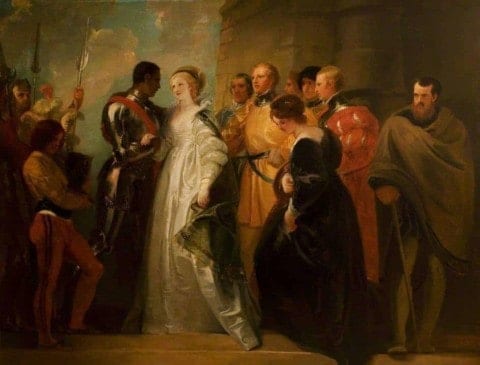 I have priority to two things:

I am loyal to you and your advice;

My life and experiences have taught me

How to respect you; you’re an important role model;

I have been your daughter up this time: but this is my husband,

And like the love my mother showed for you,

By putting you over her father,

I too would like to profess my love to this man my lord.

Othello is being accused of tricking Desdemona to fall in love with her and she is called in to vouch for Othello that he did not. From these passages, Desdemona is professing her love for Othello to her disapproving father. Desdemona is explaining to her father that she loves him and Othello equally, but she is so much in love with Othello that she has put him over her father. She acknowledges all the things her father has given her. The knowledge he has given Desdemona has allowed her to fall in love with Othello. She uses her parents situation where her mother puts Desdemona’s father over him to make her father understand why she has put Othello above him. This all takes place in someone’s chamber.

My mother had a maid called Barbara:

Barbara was in love, and her love for this man drove her crazy

And he deserted her: she had a song called ‘willow;’

It was an old song, but it expressed her feelings,

And she died singing it: and that song is stuck in my head tonight;

All I can do is hang my head down, and sing it like poor Barbara.

Desdemona is talking to Emilia about her falling out with Othello. Othello has been rude to her lately and she doesn’t understand why he is treating her so unfairly. They are in her room before Desdemona is going to bed and she is talking about her mother’s maid Barbara. The reason she brings up Barbara is to parallel her situation with Barbara’s unfortunate love. Desdemona is feeling like her love for Othello has made her a fool for falling in love with him. Before Barbara had died she sang an old song called ‘willow’. With sadness Desdemona has that song stuck in her head which makes her feel the need to sing it. She asks Emilia to leave her alone.