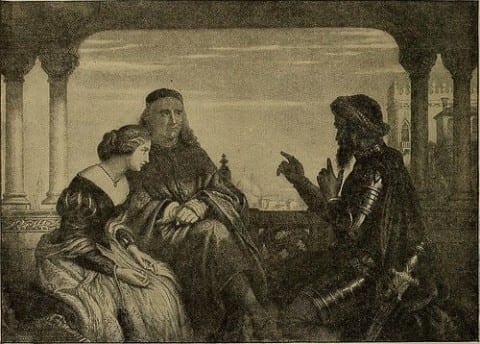 Desdemona 1.3.208-218
My noble father,
I do perceive here a divided duty:
To you I am bound for life and education;
My life and education both do learn me
How to respect you; you are the lord of duty;
I am hitherto your daughter: but here’s my husband,
And so much duty as my mother show’d
To you, preferring you before her father,
So much I challenge that I may profess
Due to the Moor my lord.

In these lines, Desdemona has been brought before her father, Othello, and the council in order to judge whether Othello has tricked her into marrying him and if she actually loves him. She shows her loyalty to Othello by using her mother’s loyalty to her husband instead of her own father in order to back up her case (lines 215-218). Desdemona’s use of her mother as an example leaves no room for her father to argue back, as he cannot deny the loyalty of his wife over her own father. This opens his eyes to his daughter’s maturity and standing, but doesn’t quell his anger any less. Desdemona is a witty young woman with a good understanding of her social status and duties. Her argument proves her love while avoiding completely throwing off her father, as she does express her gratefulness to him for her life and upbringing.

Desdemona 4.2.175-186
O good Iago,
What shall I do to win my lord again?
Good friend, go to him; for, by this light of heaven,
I know not how I lost him. Here I kneel:
If e’er my will did trespass ‘gainst his love,
Either in discourse of thought or actual deed,
Or that mine eyes, mine ears, or any sense,
Delighted them in any other form;
Or that I do not yet, and ever did.
And ever will–though he do shake me off
To beggarly divorcement–love him dearly,
Comfort forswear me!