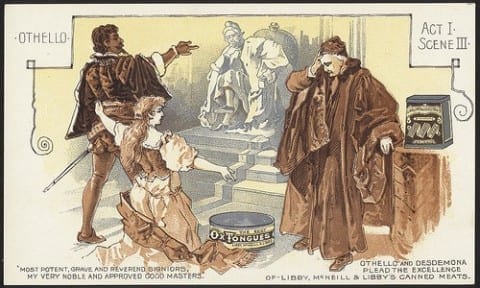 I know I have a duty to you;

For the rest of my life,

I respect you dearly,

I am first your daughter but he is also my husband,

And just like mother catered to you over her father,

I must do the same.

I am as curious as my happiness

To see you here. Oh how happy!

If after every storm there is this happiness,

Let it storm till I come back from the dead!

Rise as high as heaven and as low as hell,

It is now I am so happy; I am scared,

In the first passage, Desdemona is speaking with her father about how she must show as much devotion to Othello, who is now her husband as her father would expect from his wife. She is trying her best to relate it to him in a way to please him and make him understand why she is doing what she is doing. She tells him,

“I am hitherto your daughter: but here’s my husband,

In the second set of lines, Othello cannot help but express how happy he is to see Desdemona. He presents an excellent example of imagery when telling her how happy the sight of her makes him, saying

“If after every tempest come such calms,

He uses images such as wishing storms never stopped if they brought this much calm just as her happiness brings him. And he dares the hardest workers to travel the seas and go as low as hell and as high as heaven if it will keep him this happy always.