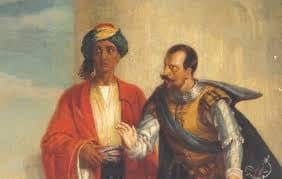 Paraphrase:
I am conflicted

You have taught me both of these things

I owe you everything because you have given me these things

I am your daughter, but Othello is now my husband

I owe him the respect that my mother gave you

Just as she preferred her husband over her own father

I will do the same and give him my loyalty

Now to the Moor, who is worthy as my husband

In this moment of the play, Desdemona is being questioned about her relationships by her father. She is pretty much asked which side she is most loyal to, her husband or her father. Desdemona expresses that she is very torn between her father because he gave her life and education, but Othello is her husband and he deserves her loyalty just as Othello deserved loyalty from his own wife. Desdemona argues, “I am hitherto your daughter: but here’s my husband,And so much duty as my mother show’d, To you, preferring you before her father, So much I challenge that I may profess Due to the Moor my lord.” She is saying that even though he is her father, she will show loyalty to Othello because he is her husband. She uses her own mother as an example to sympathize that her father experience this loyalty from his own wife. This is one literary element that Shakespeare utilizes in this section. He uses examples to justify Desdemona’s decision as to where her loyalties lie.

I am going to “lose” this napkin in Cassio’s bedroom

I’ll let him find it, even the smallest of objects

Are confirmations to jealous people as strong as

Othello already suspects something of me

At first they seem faultless

But once they start to flow through your blood

In this passage, Iago is beginning to formulate his plan to deceive Othello. We begin to see just how tricky Iago can be, especially when he says “Trifles light as air Are to the jealous confirmations strong As proofs of holy writ: this may do something.” He is saying that something as small as a misplaced handkerchief can have a fatal effect on Othello. Shakespeare uses multiple metaphors in this passage. He describes dangerous thoughts as poison that run through our veins, burning us like sulfur mines.