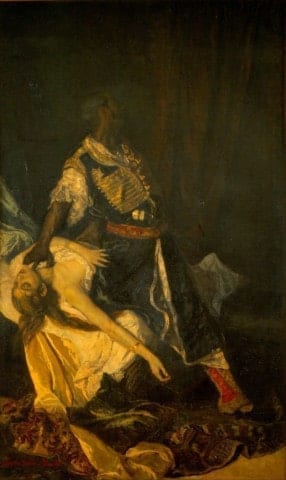 Throughout act 3 scene 3 of Othello, Iago is putting the final touches on his plan for duping Othello into believing in an affair between Cassio and Desdemona. He has already planted the seed, and Othello trusts his judgement in the situation, but he is now capable of planting an object that Othello would see as tangible proof: Desdemona’s handkerchief given to her by Othello. Iago says to himself after obtaining the handkerchief:

Iago speaks this immediately after Emilia leaves him alone with the handkerchief, and he quickly reveals his twisted plan to frame Cassio of an affair with Desdemona. He lays out his scheme to confirm Othello’s suspicions in Cassio by allowing Othello to see Cassio with Desdemona’s handkerchief, the final blow in Othello’s already skewed opinion of Cassio. This snippet of Iago shows how evil his plans really are, comparing his lies to poison acting upon Othello’s mind.