One Boy vs. Harlem

Home One Boy vs. Harlem 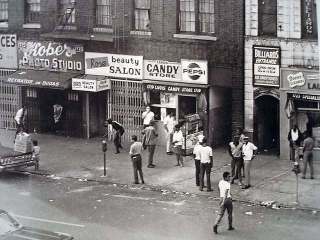 So far the theme in “Down These Mean Streets” might remind the reader about some stories that you hear on the news. In the news you sometimes hear a story about a little kid getting racially targeted by a group of people, they can be verbal or violent. However, in the book Piri who was getting targeted by a group of kids, later became friends with them.

The book that I am reading is about a young Portarican boy named Piri Thomas, Piri lives in Harlem NY during the Great Depression with his mom and dad and 2 younger siblings. Piri’s father was able to get a job thanks to the WPA but it wasn’t enough to have a nice home.

The fourth paragraph of “Down These Mean Streets” by Piri Thomas might leave a reader feeling sympathetic because it is about Piri getting racially targeted by a group of kids in a part of Harlem that he and his family just moved to. An example of this is on page 24 “Till that one day I was on my way home from school and almost had reached my stoop when someone called, Hey you dirty fuckin spic.” this is aggravating because that came from a group of kids the same age as Piri.

After this part of the story, most readers probably will be looking forward to reading the rest of this book because they might want to find out what problems that Piri faces in the future and how he solves them.what’s probably going to happen next is that his family is going to have to move to a new part of Harlem since his family is not that fortunate.