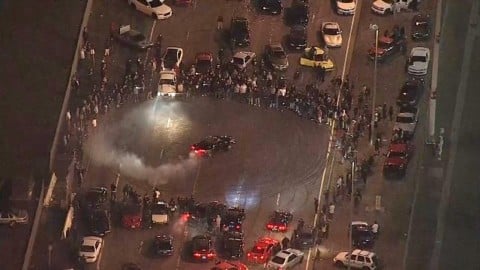 Do you often confuse Oakland with San Francisco? We shouldn’t confuse San Francisco and Oakland because they both have very different cultures. Oakland is a diverse community and a very cultural town. Oakland has many things that make up their culture and all unite and divide the community. Some of Oakland’s cultural traditions are sideshows, street art/murals, and the hyphy movement.

Sideshows is a huge part of Oakland’s culture, it’s what Oakland is best known for.  Sideshows do unite Oakland because it’s a place where the community can come together and have a wonderful time. For example, Medina explained, “This was the inception of the sideshow culture where the community was able to meet, and share music, art, and wares for the industrious, entrepreneurial and creative residents of deep East Oakland” (Medina). This shows that Oakland sideshows do unite the community because it is a way for the whole community to come together and enjoy themselves with cars,art, and music. In a interview I did on a person who wants to remain anonymous but lives in Oakland stated, “Sideshows is a way that unites the town because it makes us forget all the other problems that happens in Oakland” (Anonymous). This interview explains that sideshows do unite the community in a positive way. Sideshows makes those who attend let loose. However, Oakland sideshows can also divide the community because all the violence that comes out of it. According to Eastbaytimes.com, “ Over the years there have been numerous homicides, shootings and other acts of violence as well as fatal wrecks in Oakland associated with sideshows. Two weeks ago a group of 200 or so motorcyclists were involved in a sideshow on Interstate 880 near Hegenberger Road that resulted in CHP chases and the arrest of five participants” (Harris). This explains that there has been multiple crimes surrounding sideshows. Also participants even get arrested for sideshows. This shows division within the community because more people are getting arrested and the community isn’t doing anything about it. Although sideshows is a huge part of Oakland’s culture and unites the community it also divides the community by being a place where people can come together but can also get them arrested for all the violent and illegal.

Additionally, street art and murals are another huge part of Oakland’s culture because the art shows a meaning and other Oakland residents can relate to. For instance, Ecophiles.com states, “I have become enamoured with capturing the street art that surrounds and tells the story of the neighborhoods. As the Bay Area is gentrifying rapidly, there is palpable evidence that the art telling the history of the diverse cultures here is being lost in exchange for new condos and developments” (Shilder). Morgan Shilder is a photographer based in Oakland, California. Morgan has a Masters in Education and has many years of working in after school programs around the Bay Area. Therefore, Oakland’s street art or morals is a way of showing their stories and informing others about them. Street art is also a non-violent way of speaking out. In a interview I did on Hilda Chavez, a college student who has been in Oakland for 16 year stated ,” Street art brings the community together because the street art represent the place,the struggle, and the community. It’s not suppose to divide the community” (Chavez).On the contrary, street art can be mistaken as graffiti. According to KQED.org, “Oakland requires businesses to remove graffiti on their own. DeVries said the city doesn’t have the resources to provide paint each time a building is defaced” (Katayama). As a result of graffiti being painted on walls of business the owner have to pay for removal of the graffiti. Most of the times it’s tiny business and they can afford for removal. Which can make it difficult whenther street art is considered graffiti. Street art can be a way for an artist to express their stories but then gets misinterpreted as graffiti because those who do graffiti on the walls thinks it’s street art on petite businesses walls.

Moreover, the hyphy movement had a huge impact on Oakland’s culture and also the Bay Area in general. Hellogiggles.com states, “Finding hyphy at such a pivotal time in my life also evoked this sense of newfound freedom; liberation, even. When mainstream music felt oppressively conformist, hyphy gave me permission to be exactly who I wanted. It united geeks, hood, and preppy kids alike, and those in-between also had a place on the dance floor, or sideshow. Anyone could be a member of this special club; you weren’t going to be laughed at or turned away if you were different” (Fitcher). Angela Fitcher is a mixed race San Francisco native. As a result of the hyphy movement it made those felt liberated and free. It also made them feel like that they can be themselves without any judgement. Also made people have common liking like E-40,Too Short, Mac Dre, and Keak da Sneak.  However since the hyphy movement has brought sideshows and they have also had some positivity impact but also a negative and dangerous impact on Oakland. In a article Mercurynews.com mentioned, “The hyphy culture, which centers on a freewheeling attitude – drugs, partying and reckless behavior – sometimes led to violence at high-profile events, causing outsiders to focus more on that conduct than the music itself” (Liu). Mercurynews.com is news that is specifically on the Bay Area. This shows that the hyphy movement has brought violent drug abuse, partying, and reckless behavior. All of those that was being promoted from the hyphy movement divided the community because the hyphy movement was mostly about the music and hip hop but residents from the Bay Area made it more into partying and doing drugs. The hyphy movement lost it meaning. Although the hyphy movement brought liberation and freedom to people it also lost its meaning and was promoting violent and illegal actions actions.

The person I interviewed would like to stay anonymous. But they live in Oakland and they are aware of sideshows. Also is well known with the hyphy movement.

Hilda Chavez talked about the diversity and the culture that Oakland has. She is credible source because she has been in Oakland for 16 years and has seen the different parts of Oakland’s culture. She also has done graffiti in middle school and knows how people misunderstood graffiti and street art.

Ficther , Angela. “For the Love of Hyphy: How a genre helped unite my community .” Https://Hellogiggles.com/Lifestyle/Formative-Jukebox-Hyphy-Genre/, 3 Apr. 2016.

Angela Ficther is from the Bay Area she knows Oakland culture. This blog talks about how the culture of Oakland united the community.

There has been numerous homicides, shootings and other acts of violence as well as fatal wrecks in Oakland associated with sideshows. Harry Harris works at Oakland Tribune and then later became a reporter. He has covered tens of thousands crimes.

This articles talks about how graffiti cost increases because they have to repaint the concrete walls. Also, how crime is founded within graffiti. Devin Katayama is a reporter covering the East Bay for KQED news. He earned his MA in journalism from Columbia College Chicago.

This articles explains how the hyphy movement has changed over the years in the Bay Area. Also how there were some negative outcomes from this movement. Mercurynews is news specifically on the Bay Area.

The Art Crime Archive (ACA) is a collaborative laboratory, teaching center, and web-based platform devoted to the study of the shadow space where art and crime overlap.

This article shows different Oakland morals. Morgan Shilder is a photographer in Oakland, California. She has a masters in education and has many years working in after school programs around the Bay area

Dear Kayla,
I’m glad that you enjoyed my blog! What is your opinion on Oakland’s culture? I would like to know. My opinion is that I’m in the middle I think it divides the community but unites the community at the same time. Thank you for taking the time to read my blog and hopefully you will read what I write next!

Dear Jennifer, Your blog was outstanding.
Their was such great detail and you had a great hook. One sentence that stood out to me was” Although sideshows is a huge part of Oakland’s culture and unites the community it also divides the community by being a place where people can come together but can also get them arrested for all the violent and illegal
“. This stood out to me because your are completely correct in my opinion.One question or comment that I had is i would love to see what your opinion is overall and what do you believe this does to our community. Thank you for writing this amazing blog on oakland and its culture. I look forward to seeing what you write next.