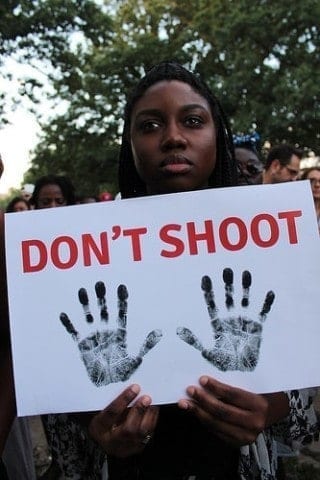 ¨Latest census figures show black people make up the biggest single ethnic group in Oakland at 27.3%, with white people at 25.9% and Hispanics at 25.4%¨ (Paul Harris).  If the number of black, white, and latino individuals in Oakland are the same then why is there a disproportionate amount of police violence towards people of color?

People of color are oppressed by police because they are misunderstood and therefore are unfairly treated by the system. In the article, “Oakland police: controversial history sets tone for city’s discord” by Paul Harris it reports, “The 17-year-old Black Panther party member was involved in a shootout with police, but surrendered and stripped down to his underwear to show he was unarmed. However, he died after being shot by police at least 12 times” (Harris). This quote indicates police automatically mistreated the black man even though they knew he was unarmed. He was poorly treated by the system which proves people of color are misunderstood and portrayed as bad people simply for their darker complection. If it was a white male at the crime scene possibly the police wouldn’t  feel the need to enter the scene armed because they are the “good” people.

Secondly, People of color are being oppressed because they are portrayed as bad people for trying to keep a roof above their head. In an interview with Abraham Arredondo, who has lived in Oakland for 6 years, he stated, “Just like any other kid struggling I had to do what I had to do to eat everyday of my life n 5-O labeled me as a bad kid” (Arredondo). This quote proves some people of color have been living a hard life. For example, being abandoned by parents which means you have to find a way to survive. Not all people of color chose to live this way but for others it may seem easier to do anything for a little change. Therefore, they aren’t bad people or kids they’re just hurting and oppressing them even more won’t solve anything.

Finally, People of color are being dehumanized while white people have many privileges In an interview with Gloria Elizabeth Reyes, she explained, “I was in the car with a black woman… My good friends mom and she was going at the speed limit, she wasn’t using her phone. She didn’t do anything bad and she got pulled over. The police said she had ran a red light and there wasn’t any recent red lights” (Reyes). Based on this information I know this woman only got pulled over for looking “different” for her skin tone. It is well known if you have light skin, colored eyes and blonde hair you will live an easier life in public areas.

In conclusion, people of color are unfairly treated because of the way they look and it must stop because all people are equal in this world.

I’m so glad you enjoyed this article and could agree with it. This world needs more people like you that understand human rights.

Dear Katie,
I really enjoyed reading your post I can tell through your writing how passionate you are about the subject. I have the same fear and am unable to understand the situation the same as you. I am glad you provided the example involving the 17 year old Black Panther Protestor, I had not heard about the incident but I can defiantly relate to the situation. About four years ago my uncle got arrested he was already on the ground when it happened but the police still felt the need to shoot him twice and kick him to the point of breaking his ribs. Thankfully he recovered but there are so many instances where African Americans especially males are not even given a chance to explain themselves they are automatically seen as threat and police without second guessing fee the need to use force. I also love that you added satisfies it shows how bad this problem has gotten for monorities and African Americans in particular. I am very greatful I was able to read your post and relate on so many levels being that I am African American myself, thank you so much.

I’m very sorry to hear about your uncle. That must have been very traumatic. These issues need to be fixed as as soon as possible. But now with Trump as president it will be tough. I’m glad you enjoyed this. Thank you 🙂

I am astonished by your post, “Oakland: Police Relations,” because I completely agree with it! I totally believe that police are unfairly treating people of color and that it needs to be put to an end.
One sentence that you wrote that stands out for me is: “People of color are being oppressed because they are portrayed as bad people for trying to keep a roof above their head.” I think this is a good way of supporting what you feel and is powerful because you’re explaining one of the ways people of color are being oppressed; for simply doing what they can to survive.
Another sentence that stood out to me was: “People of color are being dehumanized while white people have many privileges.” This stood out to me because again it is so relatable and true! Police need to stop treating people differently just because of their color and stop giving other people privileges because they have lighter skin! People of color are not getting to live their life being treated like this.
Thank you for your writing! I look forward to seeing what you write next, because its so persuading.