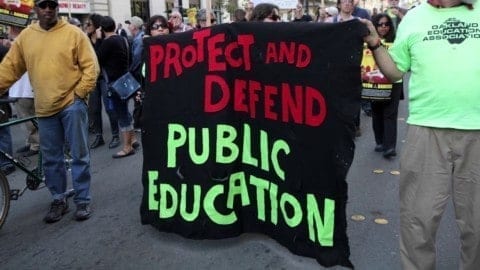 “More than 3,000 public school educators from the Oakland Education Association went on strike to demand better pay, school funding and overall to improved classrooms conditions—meaning less-crowded” (Garrido). There has been a lot happening in schools in Oakland and sadly not much has changed since the strike. Based on the research, it is clear that Oakland education has had problems because  of the systematic problems in California have led to funding issues and too much of a focus on testing.

Oakland Education has taken a big turn and is one of the lowest and poorest education in California because of funding issues. For example, Oakland Education Association went on strike to demand a better pay, School fundings and overall to improve education.  According to Strauss, “Teachers in Oakland, California are going on strike Thursday over largely the same issues that provoked the Los Angeles walkout: pay, large class size, too few nurses and counselors and other support staff, and the spread of charter schools where nearly 30 percent of the district’s students are now enrolled” (Strauss). This proves that teachers want the best for the student’s but if they don’t have enough funding or are not getting paid enough is likely that they will want to find a better job. The increase in class sizes and not enough staff makes it difficult for students to get the right education. Also, Strauss talks about Los Angeles also going on strike because of similar issues and this is a problem in the California system. A lot of the funding issues trickles down to teacher pay. According to the article “The Oakland Teachers’ Strike Revealed California’s Education Crisis by Bryce Covert says “The average Oakland teacher makes about $63,000, compared to the $80,000 average across California school districts” (Covert). This shows a funding issue that has made Oakland worse than other places in funding.

Secondly, education  in Oakland is a problem because California puts too much attention on testing. In the Interview, Sean Iannello stated, “Many teachers teach students to pass tests and not deal with real world situations” (Iannello). Teachers are focused more on what the school is requiring them to do and preparing students for tests that don’t determine what they are capable of.  President Obama agrees. In the article “Study says standardized testing is overwhelming the nation’s public schools” published by “The Washington Post” and written by  Lyndsey Layton Obama said, “But I also hear from parents who, rightly, worry about too much testing, and from teachers who feel so much pressure to teach to a test that it takes the joy out of teaching and learning, both for them and for the students. I want to fix that” (Layton). Even Obama agrees that there is too much testing because stressing students out and making education bad. We need a solution and we need it fast.

Although a lot of people would disagree with me saying that the test that all of that is normal and that the class sizes should  be like that and that teachers should still get still get low pay and would be saying that test is just for practice. I know that that is putting too much pressure on the students on teachers and also on there funding. Based on the article on Good School, Rich School; Bad School, Poor School published by The Alantic by ALANA SEMUELS it says “This is one of the wealthiest states in the union. But thousands of children here attend schools that are among the worst in the country. While students in higher-income towns such as Greenwich and Darien have easy access to guidance counselors, school psychologists, personal laptops, and up-to-date textbooks, those in high-poverty areas like Bridgeport and New Britain don’t. Such districts tend to have more students in need of extra help, and yet they have fewer guidance counselors, tutors, and psychologists, lower-paid teachers, more dilapidated facilities and bigger class sizes than wealthier districts, according to an ongoing lawsuit. Greenwich spends $6,000 more per pupil per year than Bridgeport does, according to the State Department of Education.” This proves that the system is messed up and that we need to do something about this.

In conclusion, there has been a lot that is going on for the School systems in California such as low pay for teachers and that there is a large class sizes  and that the California schools give out too much test and also do not have a lot of fundings. If there is not a change students will not have the materials that students need. These are reasons why there is not a lot of school funding, there is a lot more class sizes and there is not a lot of education and also that the teachers give out too many tests which stress students out and give the students a lot of pressure.

Dear Efraim,
I am a student at San Jose State University and I loved reading your blog post! I think it has a lot of significance especially because education plays such a large role in our lives as students. When you talked about “the increase in class sizes and not enough staff,” I could not relate more: I went to a large, public high school in San Francisco, and we had almost 3,000 students with the student to teacher ratio almost 30 students per teacher. Thank you for sharing your perspective and experiences from Oakland; I truly enjoyed it.

Thank you very much for this thoughtful piece. This is issue is extremely important and I think you touch on a very important point about California’s education. As one of the biggest and wealthiest states, we are 42nd in per pupil spending. It doesn’t make much sense! I teach at a school in San Mateo and see everyday the disparities among schools and districts. The Bay Area is the most expensive place in the world to live and teachers can no longer afford to live where they teach. We lose good teachers every year because they can not afford homes in this area, and we are high paying district! Students in Oakland deserve an equal opportunity to the best education possible by having the best teachers possible. The only way to keep good teachers around is pay them more. I really enjoyed how you connected the teacher strike in Oakland, to student’s learning conditions and testing. Your opinion is very important and I am so glad you go the opportunity to research and discuss such an important topic. I can tell you are really passionate about it!

As a future teacher in the state of California, I appreciate the thought and effort your put into writing this article. You do a wonderful job of laying out the argument for why teachers across California have tricked and how they would like those strikes to positively impact schools and classroom. I might suggest finding a source in the future that compares the funding of two schools in California. While your article does compare the unequal funding in schools across America, your post specifically pertains to California and Oakland’s crisis. By identifying an article that compares two districts in California, you can better support your argument in regard to Oakland’s education crisis. If you find such a source, please let me know. I would love to see comparisons of funding in California districts!

Dear Efraim, I agree with your post, “Oakland Education Crisis” because teachers in Oakland should get payed more for the job they do. One line that stood out to me was, “The increase in class sizes and not enough staff makes it difficult for students to get the right education.” I agree with this statement because if there is more students in one class than the students are less likely to get 1 on 1 attention that they need. Your essay reminds me of when the teachers had the strike in march for better pay and smaller classroom sizes. Thanks for your writing. I look forward to seeing what you write next, because I really enjoyed reading ur writing. I like looking at other people point of views and comparing them to mine. Hope to read your work in the future!