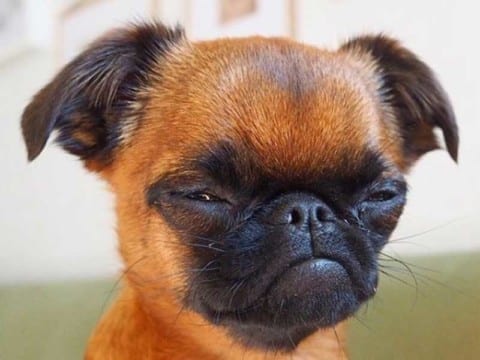 The article, “The Dilemma: No Petting” explains a young man’s problem with people petting his dog. He owns a Brussels griffon dog which isn’t a dog that is very common where he lives which is why his dog grabs people’s attention. The problem with his dog is that he doesn’t like being touched by others, so when people ask him if they can pet him he jokingly says no yet they still pet him which enrages his dog causing him to snap. He’s unsure if his dog is the problem and should be taught to be friendlier or if it’s the strangers that continue to pet him.

He gets advice from a writer telling him the dog has nothing to do with it especially if he’s already trained. The problem is that he needs to work on enforcing his “no” when people ask to pet his dog because if he continues saying “he doesn’t like people messing up his hair” strangers will ignore the joke talking and will proceed to pet the dog. People must also learn to respect others’ space and be aware that they don’t have the right to be touching others, their property, their pets, or their children. A “no” is a no which is why people should be thoughtful of being denied permission to pet your dog.

Dear Yamile,
I am star-struck based on your post. I can’t believe the dog actually doesn’t like to get a pet, I thought every dog would like to get affection and attention. Maybe the dog needs more training since it gets upset at things that should be normal. I believe that the dog owner should train him more in order for the dog to learn some discency.
One sentence that stands out to me is when you mentioned that when people ask to pet him, the owner says no, but yet they take it as it a joke and still proceed to pet him which enrages the dog. That stood out to me because there, the owner should control the dog a bit better, he should be able to tame him at any given time. Also, he should have let people know that the dog doesn’t like to get a pet, instead of them figuring it out on themselves.
Thanks for your writing. I look forward to seeing what you write next time because I didn’t know of a dog that didn’t like to get petted. I feel like you bring interesting topics when you post which makes this assignment much more entertaining.