NICE GUYS ARE NOT IN THE KKK!!!

Home NICE GUYS ARE NOT IN THE KKK!!! 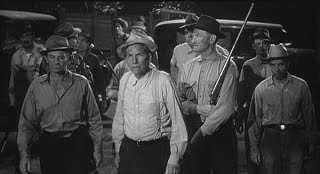 Recently, I read “To kill a mockingbird” (the screenplay) by Horton Foote. When I think about this part of the play it gives me satisfaction to know that a 6 year old may or may have not just saved the life of a black man and saved her father from getting hurt from a group of lynch men.

The protagonist Mr. Cunningham shocked me the most. How can you think a very poor farmer that looks so sweet and kind at the beginning of the play can be part of such a racist and hurtful group such as the Ku Klux Klan. Somehow these men found out Tom Robinson was back in town due to his trial date getting closer. These men came in the night just to execute Tom Robinson because they felt they were god to take away somebody else’s life away knowing this man has a wife and family just like them. These Ku Klux Klan men didn’t put themselves in Tom Robinson’s shoes as if race and color define who you are. Tom Robinson bleed and was a human just like them. The only difference was the color of there skins.

Back when slavery was intact in the was intacte in the United States of America the slave owners exploitation of the black women sexuality was one of the most significant factors differentiating the experience of slavery for males and females. Somehow they were related due to all this raping black women received from the slaves owners who were white.

I too loved “To Kill a Mockingbird”! I’m glad you analyzed and enjoyed the book, and it’s weird to see these kinds of events still having an effect on the way we function societally today. For more info on this, check out this article I found: https://www.npr.org/2019/04/09/711536566/new-report-takes-a-deeper-look-at-how-latinos-experience-discrimination-in-the-u

Loreanny, your interpretation of the book “To Kill a Mockingbird” was very interesting, and I love your comments about the racism. I think it’s very neat to see how seemingly nice people can secretly be horrible racists, just because you haven’t seen them interact with people of different colors. More recently, the KKK has actually been trying to rebrand to be less violent, which you might find interesting. Here’s a link to an article about it.
https://www.npr.org/sections/codeswitch/2014/11/12/363511888/why-the-kkk-is-reaching-out-beyond-white-folks

Loreanny, I really enjoyed reading your interpretation of the book “To Kill a Mockingbird”. I think you had a very good analysis of the plot, and I highly agree with all the points you made. I also just watched a movie about racism called “Selma”. However, this movie touches on the voting rights act whereas your book touches more on slavery. If you want to learn more about discrimination, I would recommend watching this movie, and I would love to know your thoughts on it!