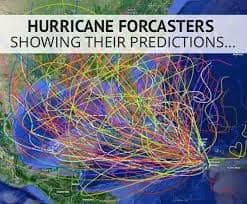 Scientists are currently discussing a new technique for predicting these hurricanes. Rather than relying on historical patterns of hurricanes and tropical cyclones, they will take the information being outputted from the global models and “apply it to current and future climate states simulated by a suite of global models developed in support of the most recent Intergovernmental Panel on Climate Change report.” In other words, they will be simulating hurricane conditions and will use models to try and predict these simulated hurricanes. This new technique will solve the horizontal resolution issue because we will be using a new model called a “coupled ocean-atmosphere hurricane model” that provides high resolution at a very low cost.

Through these simulations, scientists will try to prove that this large change in tropical cyclones is triggered by the increasing differences between the boundary layer of hurricanes and the middle troposphere as the climate warms. In other words, they are hoping that the simulations demonstrate patterns that link the increasing intensity of hurricanes with the warming climate due to climate change. This ability to predict hurricanes better will benefit the world in many ways. Being able to predict their behaviors could help us take precautions to protect the coasts and the people living on or near the coast. It could potentially save us a lot of money and many lives.

This post sounds like great news and some major improvements are being made to protect our people. These last several years I feel like there has been major spike in the amount and destruction of Hurricanes hitting our country. Hundreds of people are losing their lives because of these terrible hurricanes. I wouldn’t say that the issue is predicting these hurricanes as much as it is actually protecting ourselves from them. The last couple deadly hurricanes seem to have been well known to be coming but many people still died because we did net execute the correct procedures. Hopefully this will be fixed in the future but this is a step in the right direction. Here is a site I think could help you.
https://www.ucsusa.org/global-warming/science-and-impacts/impacts/hurricanes-and-climate-change.html#.WpzRjraZMUs