New Animation Based on Aesop’s “The Farmer And His Sons” 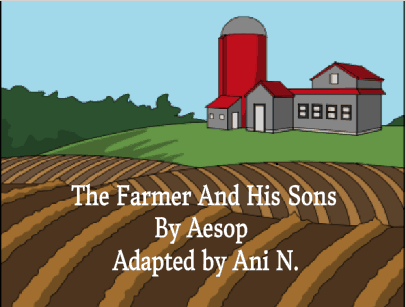 From the producer of “The Witch’s Dilemma” comes a brand-new animation… this time based on a fable!
Presenting the adapted “The Farmer And His Sons”…

My animation is based on a fable by Aesop. It is called “The Farmer And His Sons”. It is very interesting. Once upon a time, there was a farmer who owned a large estate. He has two sons. One day, he called them into his room, ready to break the news. He had gotten very old and knew that he was dying. He told his sons that there was treasure buried somewhere around the farm! Before he could say more, “Father” passed away. In the original version, there was only that one outcome. I added an outcome where the sons choose not to listen to their father (thus they do not respect their elders- the moral of the story). They do not dig for any treasure, disagree over this and don’t do any work all summer. I won’t spoil the ending, but there is one “happy” and one “sad” ever after, so to speak.
I choose this fable/fairy tale because it wasn’t too over complicated and the decision that had to be made wasn’t so much of a stretch, it came naturally. Many people had to make up decisions because they choose fairy tales that were long and not really based on a choice, more of an adventure. “The Farmer And His Sons” already had a good implication for a choice to be made! And it is clear which ending is the morally correct one and which one is wrong.
To make this project, I first wrote a script based on the original fable. I scripted two endings- one following the original story and an alternative that I made up. Then I made storyboards showing the action in the acts. This was the planning stage. Finally, I made the animation part by part, animating the characters to have conversations and move around until it became an actual story. When I made the animation, I used the script and storyboards as guidelines to help me build the final animation. In total, it took about 4 hours.

Here is the link to my storyboards and script-
https://docs.google.com/document/d/1xXgarjbkH-c2PbUo-ZnoWTNgulUO-xnAkJFwSQW7R6o/edit?usp=sharing

I linked this so anyone can see what work went into my animation and learn how to do it themselves. They can see my storyboards and script. It may be an interesting experience.

OMG Ani you are so talented. If you see this, tell me and I will give you a dollar. Offer ends on Friday May 18th, so claim your dollar ASAP.