My thoughts on In Dubious Battle

Home My thoughts on In Dubious Battle 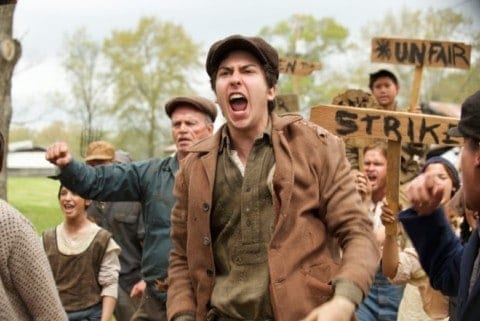 In the book, In Dubious Battle, the story takes place in the 1930s, in California. The main character is named Jim Nolan, who was once arrested for standing on a monument when he was trying a speech made in an area called Lincoln Square. Jim leaves his old apartment to work with a few men known as “sympathizers”, who help people cope with the harsh situation of the Great Depression. One of the most iconic sympathizers is Mac, who seems to act like a leader, but is not. After the first day of work, Mac asks Jim if he wanted to go with him to a place called Torgas Valley, where there is an apple farm. The purpose of going to the apple farm is to collect all the apples and then go on strike. After saying yes, Jim and Mac hitch a ride in a train car and have one of the most interesting conversations in the book. After reaching Torgas Valley, Jim and Mac ask for directions from a man named Alfred Anderson, who owns a diner called Al’s Lunch Wagon. Soon after, Jim and Mac find the apple farm, where they meet up with a bunch of men who were sitting around a bonfire. Jim and Mac meet a man named London, who is just as important to the book as Mac. By the next day, Jim and Mac start off their day finally picking apples with the apple farmers. After Jim finished dumping apples into a box to be loaded onto a truck, he meets an old man named Dan, who claims he is a “top-faller.” Jim listens to Dan’s story about why he hated the college boys (who were identified as “checkers”) and how he hates being old (he is 71 by the way). Soon, Jim and Dan meet up with Mac who came back from a discussion with London, saying that London was not against the idea of the strike. Mac says that they were going to London’s friend named Dakin to talk to him about the strike. Through the rest of the book, the manager and the checkers start to get worried about the apple farmers, seeing how the farmers were acting grouchy more than usual. As the story progresses, the apple farmers try to find new reasons why they should go on strike, and Mac encourages the men to be angry. However, ever since the strike on the orchard farm started, it became a lot more harder and a lot more worse for the men. Examples of such would include food supply running low, the strikers being arrested, and much worse. Even though I should never spoil the ending, I will say that it would surprise you as much as it surprised me (if you read the book, of course).

Thoughts on the book:

My thoughts toward the book is that the story has an interesting “catch.” What I mean is that In Dubious Battle really grabs my attention as a reader. Upon first thought, I asked myself, “I wonder what is so interesting about a bunch of apple farmers going on strike.” Sure enough, the first thing that hit me from the book was how vivid John Steinbeck wrote the book. Each and every character so far in the book has an interesting personality. The one character who seems to get the most spotlight, however, is the character Mac. Just a little reminder, Jim Nolan is the main character, not Mac. Mac’s story is interesting however. So far, Mac seemed to change his backstory a lot, basically lying about his past. However, Mac’s character is of a friend you wouldn’t mind hanging out with. Mac is a sympathetic man who does not hesitate to help. He is quick when thinking and works by pure luck. For the main character, Jim, you would notice that his past was not as good as you might think. Jim Nolan’s childhood was full of sadness.

In the rest of the book, I notice that there is a lot of emotion for the characters. Most of the time, it’s anger. What I really love about John Steinbeck’s books is how he can paint a picture of every scene by making it descriptive. The best part is, it’s not overly descriptive, meaning that it is not a slow book. For the characters, John Steinbeck makes sure that you could at least relate to every character in the book, or at least feel sympathy towards them. Another thing I want to add is how Steinbeck writes so many twists in each chapter that grabs my attention. What I dislike about John Steinbeck’s writing is that he writes chapters way too long. He didn’t even consider marking a little “checkpoint” in the chapter like the Book Thief or Stephen King’s IT. I think maybe the reason why John Steinbeck writes so much in each chapter is to really express his thoughts in a form of literature. I also think that the reason why John Steinbeck made readers feel sympathy for the characters is to put you in a new perspective. Admittedly, I almost cried because of the ending. I really enjoyed the book and the only thing I wish is that In Dubious Battle should be read in all literature classes (except British Literature classes, of course). Other than that, I really enjoyed the book and I highly recommend it to young adults.

I think the main idea of the book is really showing the harsh reality of the Great Depression. If you paid attention in US History, you would know that the Great Depression was caused by the many advancements in machinery and the stock market crashing. The Great Depression started on October 29, 1929, or “Black Tuesday.” Like many others, John Steinbeck hated the Great Depression, but what he hated more was the businesses or government or even Herbert Hoover doing nothing but cut down money. In response to the harsh time, John Steinbeck wrote books during the Great Depression. One of his most famous work at the time was Grapes of Wrath, which was about a farmer dealing with the problems of the “dust bowl.” The book I was reading, however, was In Dubious Battle, and if you read my summary of the book, I don’t have to say much on what it’s about. Just like many of John Steinbeck’s books, each chapter is very lengthy. Some might say, “he must really love to write.” What I think is that John Steinbeck is trying to communicate with his readers, like spreading out his message and using it as a lesson. John Steinbeck creates characters with a sad backstory and then later writes what would happen to them that could make you cry. It’s like he is trying to say, “life is not going to be as great as you think.” I think John Steinbeck wrote this book not to just say, “don’t go on strike,” but really, “this is what you could deal with.” I think John Steinbeck’s writing really speaks out and puts you in a new perspective of things. It’s like he was trying to make us see America in HIS eyes. Reading John Steinbeck’s books is like going to the past in the 1930s. Thank you for reading!