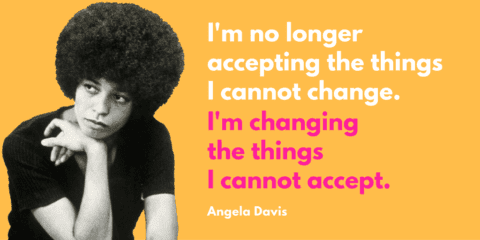 I think Angela Davis should receive the Award from Birmingham Civil Rights because  she has overcame much adversity and made many positive contributions to society. She also fought for Civil Rights and social issues “ one of the globally recognized champions of human rights, giving voice to those who are powerless to speak”.

Angela Davis went through obstacles because she is fighting for us women and us people as American to be equal. She’s a strong women and she fights for what she wants. She looks for a stand for women and make sure that we get the rights we deserved. Even when she was in jail , when her time was up, she came out stronger than before and accomplished a lot. “ Organized by those who believed that the movement for civil rights in this moment must include a robust discussion of all of the injustices that surround us”.

Angela also deserves the Award because the cause of her fighting for women’s rights lead us today for us women to be able to have more benefits than before ; for example: doing things other than stay home cook and clean, get hard working jobs that men get. “ I am proud to have worked closely with Jewish organizations and individuals of issues of concern to all of our communities throughout my life. In many ways, this work has been integral to my growing consciousness regarding the importance of protesting the Israeli occupation of Palestine”.

Angela Davis changed the world by fighting in the civil rights movement.  She also wanted everyone to have their equal rights. She also fights for equality and empowerment for women & African Americans. Somehow they feel it’s necessary to tone the political content of that movement in order to attract as many people as possible.

Angela Davis is a true leader, all of her accomplishments made her the women she is today. Through all the hardships she overcame them. She was brave enough to get out there and stand up for what she believed in. She was confident, and she never gave up because of one thing that knocked her down; which was going to jail. When she came out, she came back stronger than ever. She was definitely for the people especially women of all kind.

Brittney,
Your claim is very strong and you had factual evidence to make your claim even stronger. Although, I would provide more evidence that is more broad like what accomplishments did she reach and what goals did she want besides having equal rights for men and women. I feel that this link https://www.history.com/topics/black-history/angela-davis will make your claim better and more people would agree with you.