My Shadow Box By: Kanika Carey 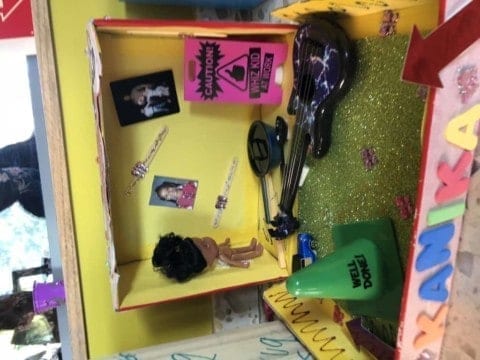 My shadow box shows my dominant and counter narratives. On the outside of my shadow box the pictures represents some dominant narratives that other individual have on me. The outside show pictures of white woman and black woman and question marks. I chose those pictures because Im a light skinned black female and society thinks that they’re only two races black and white, when they’re are a wad of different nationality and colors of black. Also I chose question marks because when other individual think of a light skinned female a percentage of people think they are just pretty and dumb and only worry about shoe, cloths, makeup, and boys. In the inside of my shadow box it shows the true identity of who I am, I have a baby doll to represent my assign identity of being the youngest girl out of my five other siblings. Another counter narrative that shows in the inside of my shadow box are some pots and spoons because I love to cook, a guitar to represent my passion for music, a car because I would like to be a nascar racer, a caution sign to preclude the world of an astute female that will be uniting with society , a con to let mortals know that when there is a job I get the job done, butterflies to represent me exploring the world, and pictures of me as kid to show me growing from a smart little girl to a bright minded young woman. Over all I’ve grown into a strong intelligent and beautiful young lady by overlooking these stereotypes that other human beans have on other individual to bring them down but in my favor build me into the person that others are looking at now.

Hi Kanika, I really like your shadow box. One part of your art piece that stands out to me is the doll you decided to include. I think society is focused more on women and the stereotypes and dominant narratives they have set on us. The fact that you chose to include a doll in your shadowbox is a smart way to show your assigned sex and being a sister. I look forward to seeing your next post in the process of showing who you are.

Hey Kanika. I’m impressed by your shadowbox. One part that stood out to me was when you were talking about the stereotypes about yourself. I agree with you a lot because those stereotypes are not true and they put down a lot of people. One piece of feedback I have for you is to spellcheck and re – read your work, but other than that your writing is amazing. Thank you for showing everyone your shadow box !