My shadow box and Artist Statement 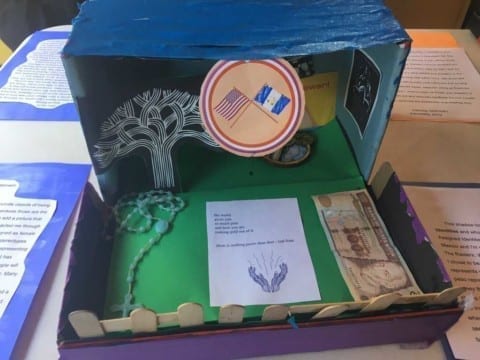 HI my name is linda and in my shadow box I have chosen to include objects of being female, being Latina and living in Oakland because those are the most important aspects of my life. I decided to add a picture that represents me being female because it has impacted me through the years that I have been growing up. I was assigned as female and I wanted to show the dominant narratives and stereotypes that women face every day. In my shadow box I am representing objects of being Latina because this is another part that has affected my life because when I walk down the street people will just assume all kind of stereotypes of me and my skin color. Many people believe the dominate narrative that people say about Latina woman because they think that women are going to need a men to take care of them. Finally, I added a picture of an Oakland tree representing me living in Oakland. Also, because I talked about the negativity of people perspective about visiting Oakland in my Autoethnography essay. I decided to add a necklace cross because it represents my beliefs since Iwas a child. 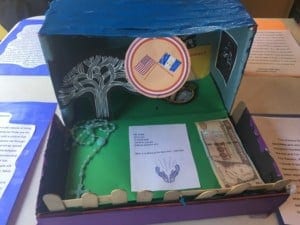 Thank you for sharing your work. My name is Bryan and I am a student at Fremont High School.
Something I liked about your work was is that you had a different type of money.
Something I have a question about is do you have any religious beliefs. Please feel free to comment on my work in the future. The address of my student blog is https://bryancfhs2021.edublogs.org/wp-admin/index.php?page=msreader.php.
Thank You!

Dear Linda,
I really enjoyed reading what your “shadowbox” contained, and I really admire the phrase ,”I was assigned as female and I wanted to show the dominant narratives and stereotypes that women face every day. In my shadow box I am representing objects of being Latina because this is another part that has affected my life because when I walk down the street people will just assume all kind of stereotypes of me and my skin color”. This quote reminds me of the stereotypes people have on Latino men and the effect of grabbing your readers attention and sympathizing with your work is something you did very well. Here a a few questions to further your thinking. Do patriarchal norms play an affect on stereotypes people have on women? What is your inspiration to keep on moving forward? How are stereotypes created?

I am so impressed about your work of art, “Shadowbox” because you talked about how people assume about women in Oakland. One part of your artwork that stands out to me is when you talked about how people assume things about women. I agree with your with you because that is what I argued for to. Many people in Oakland think of women as in like do chores stay home take care of kids. In the reality women can do anything as man can, but because of the negative things that people tell us then we just don’t do it. We need to be brave enough to shown them that women can do anything to the same thing as men. I like how you were brave enough to talk about what your objects in your shadowbox  represents and mean and how they are important for you. Another thing that stands out to me is when you talked about how you talked about people assuming bad things about Oakland when they come and visit Oakland. This is really true because I actually heard it from other people saying that Oakland is a violent place and dangerous place to be at. Your work of art reminds me of when I did my work of art that is my shadow box. I really liked the shadow box because that was a time when I had the chance to express myself and tell other people about what I think and who I am. I really had a nice time showing my shadowbox to parents and teachers I even meet new parents that agreed with me about women’s rights. Thanks for your art, I look forward on to seeing what you make next time, because I liked how you talked about the stereotypes people make from women and Oakland.