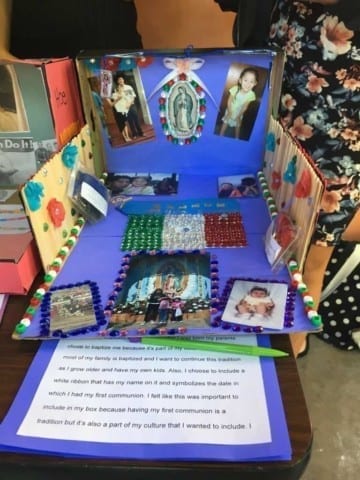 When people look at me they might think that I’m dangerous or that I’m an immigrant which is my dominant narrative.But, I’m not dangerous nor an immigrant I am a strong independent Mexican female who enjoys competitive swimming and embraces her culture this is my counter narrative. I have chosen to include pictures of my childhood to show how I have grown up but also all the traditions that have been celebrated in my culture. For example my baptism, a few months after I was born my parents chose to baptize me because it’s part of my culture and religion most of my family is baptized and I want to continue this tradition as I grow older and have my own kids. Also, I choose to Include a white ribbon that has my name on it and symbolizes the date in which I had my first communion. I felt like this was important to include in my box because having my first communion is a tradition but it’s also a part of my culture that I wanted to include. I am Catholic and I love having faith in God because it makes me feel like I have someone that supports me even though I can’t see them. I chose to include my Virgen de Guadalupe because I have a lot of faith in my Virgencita and I was also named after her so that also shows that she is a big part of my identity and culture. I am Mexican American which means that I’m half Mexican and half American but I chose to embrace the fact that I’m Mexican the most. I included the Mexican flag because it’s where my parents were born and it’s a place that symbolizes my culture and where my ancestors are from. I am very athletic meaning that because I’m female people see me different but regardless of my biological sex. I choose to try my hardest and never give up. Many people might think a lot of negative things about me because of my race. I am a Latina who has a lot of power and I will not let anyone tell me otherwise or dehumanize me for being a strong Independent female.

Hi Kenya, I am a junior about to be a senior at San Jose State University. I really liked how you did your shadow box. It’s very creative and gives me some insight into who you are. I think that you did a excellent job combining everything about yourself. The way you have pictures of important traditions that you and your family follow. I too am proud to be a Latina, I think its wonderful that your parents have done things like your baptism and how you want to keep that tradition and later on, baptize your children as well. I also like how you are into your religion. Its greatcoat you are so proud to be the person you are. Never hide or feel discouraged because of your ethnicity or sex because what others think. I am so glad to her you say you are proud of who you are because it will take you far. Keep up the great work and I wish you luck in your future! (:

Your shadow box is very decorative and showcases how proud you are of your heritage. I like how you talked about your characteristics and how they defy what people usually think of you. One phrase that stood out to me was “I am a Latina who has a lot of power and I will not let anyone tell me otherwise or dehumanize me for being a strong Independent female.” this type of strong mindset is what we need people today to have. And to make sure that no one ever makes you feel like you cannot achieve something because of your race or biological sex.

Dear Kenya,
I really like the way you decorated your shadowbox. I really liked how you gave examples of your dominant and counter narratives. What did the rest of your artist statement say by the way? Good job staying strong fighting against these dominant narratives ! Have you gotten any awards from competitive swimming? I would love to hear more about it.
Thank you!

dear Kenya,
i really like the way your shadow box looks and the baby pictures are very cool